After a few great days in Marrakech it was time to say goodbye to Saida and our beautiful riad and head up into the High Atlas mountains.

We met our driver/guide Yahya at the Porte de Sidi Mimoun, where the maze of the neighbourhood we were staying in meets the main street. From there we loaded up the car and hit the road.

The drive to our destination, Kasbah Ellouze, is about 4 hours from Marrakech, but our plan has us making a couple of stops along the way and taking the scenic older road that follows the former caravan route rather than the new highway.

Our first stop was to have lunch. Normally this wouldn’t be notable but for two things. First, lunch was at a small restaurant on a section of the highway that would see us pass over the highest road point in Morocco. Second, we met a nameless but very cute dog. Sadly we had to leave him behind.

Telouète Kasbah was built in three stages in the 18th, 19th and 20th centuries. It was the seat of the El Glaoui family’s power which owed much of their fortune to the site’s strategic location along the caravan route and proximity to nearby salt mines.

We took a short tour with a local guide named Brahim to have a look at the interior of the slowly crumbling kasbah. The ornate decoration was amazing. According to Brahim, 300 craftsmen were hired to work on the decoration of the course of three years. 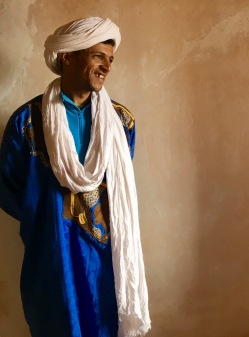 From Telouète we made our way to hotel, about 3 km from Ksar of Ait-Ben-Haddou a UNESCO World Heritage site.

This is the part of the trip that Ella had been anticipating for weeks. No, not visiting Ait-Ben-Haddou, meeting the resident camels at Kasbah Ellouze. Why? Because one of them is named Ella and another Stan (one of Ella’s grandfathers’ names). 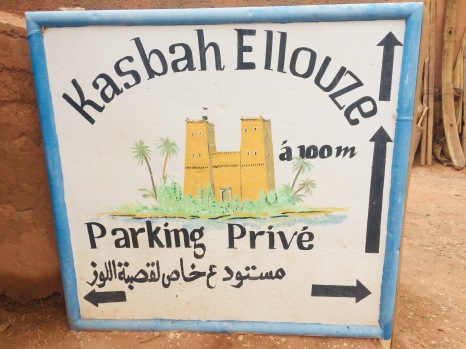 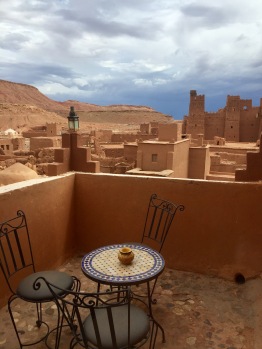 After getting settled in our rooms we walked over to the camel stalls to say hello and take a walk around the grounds. It was nice to have some time to just wander around the area. We went through the fields below the kasbah with olive and pomegranate trees (which we would taste later both for dinner and dessert respectively) and made our way down to the river.

Most importantly, meeting camel-Stan and camel-Ella didn’t disappoint. As a bonus, we even met another very friendly dog.

After that we had time for a quick dip in the heated (not really so heated) pool before getting ready for a delicious dinner in the Jazz Room. A perfect way to end the day.