When faced with a day at a UNESCO World Heritage site like Paraty you need a plan. Ours was aggressive, but with a little luck and determination we just might succeed. The plan had three components: eat, drink, wander; repeat as required.

We started with a leisurely breakfast at the hotel. This included both food and coffee/tea, so everything was going according to plan. After breakfast we decided to walk around town and check out the many galleries and shops in the historic area.

Wandering along the quay and streets of Paraty is so relaxing, in part because there are no cars. (On the off-chance that Toronto Mayor Rob Ford is reading this, it’s true, there are parts of the world where allowing pedestrians space isn’t considered a “war on the car”.) Actually, Paraty reminded us a lot of Hoi An in Vietnam. They’re of similar size, both on the water, and both have a historic section with few cars. Neither has anything particularly exciting to see, but both are incredibly comfortable places to wander until you feel like sitting on a patio for a few hours. 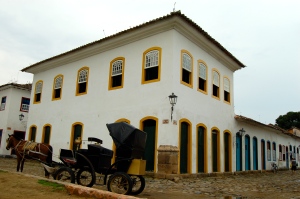 On our first day we had noticed that some of the streets had large drainage pipes at the end by the water. We weren’t sure if it was for rain or flooding and we got our answer when we found ourselves faced with flooded streets. It looks like the tides come right up into town. We didn’t get local confirmation, but in retrospect, this would explain the high sidewalks and raised door entrances.

One of the highlights of our wandering was speaking with the owner of Atelier Aecio Sarti gallery, just down from the quay. His english was great and his lifestyle enviable. He splits his time between Paraty where he has a gallery/studio and his home, two hours up the coast and accessible only by boat. Oddly enough, he had almost gone to McMaster University to study art before deciding on Denver. He was also very gracious when we left without buying any of his art. It’s not that we didn’t like it, it was just a bit out of our price range…and we would have needed to buy a bigger house for the pieces we liked. All of his pieces were done on recycled fabric once used as cargo covers on the trucks of Brazil.

During our wanders, we briefly ventured out of the historic area into the “real” part of town to go over to the bus station. Though we had booked tickets online in advance, we wanted to make sure we knew how to get there and how long it would take, especially as the bus was leaving at 5:20 the next morning and the only way to get there would be to walk. Though we had a hard time communicating with the guy in the booth, it turned out to be a good thing, as we were able to get the physical tickets in-hand. Especially good, as the booth wasn’t open when we got there early the next morning.

After some more wandering, and with drizzle starting again, we stopped to have lunch at a family-run restaurant along the canal. The front desk guy at our pousada had recommended it, saying he had known the family for years. The food wasn’t bad but it seemed a bit expensive, at least for my meal. It was only later that we realized my meal, which included two steaks, may have been intended for two. Don’t worry, I had no trouble finishing it. This explained the looks I got when I pulled the plate they had put between us towards myself, leaving Katy with only the rice and beans she had ordered.

Unexpectedly the meal came with a show. While we were eating, we were able to watch two groups of kids fishing in the canal. Some young kids were fishing with rods at the water’s edge, while some teenagers were throwing a net off the bridge. The teenagers were more successful, but I think the kids had more fun.

Despite the rain, we managed to put in a fairly strong Paraty afternoon, more wandering and a stop for ice cream. The ice cream shop was a buffet where you pay by weight. (The weight of the purchase, not the customer.) The best part of this system is the freedom to give yourself as many sprinkles (Katy) or smarties (me) as you want.

Surprisingly, we still wanted dinner that night. The threat of rain remained so we didn’t venture far and decided on an Italian place around the corner from the pousada with a sheltered patio. The food was good, but the music was even better. A pair of classical guitarists played in the corner. At times they were competing with the children of a couple at the table next to us to be heard, but they seemed to take it in stride.

A day filled with strolling aimlessly and eating. I’d say that our mission was accomplished. Time for bed and a very early bus to Rio.

For more pictures from Paraty have a look at the Brazil gallery.

4 thoughts on “A car free day in Paraty.”