Sometimes the strangest things become tourist attractions. If you asked me whether I would like to visit a poor neighbourhood controlled by drug lords in the US, I would call you crazy. However, put that neighbourhood in Rio de Janeiro, call it a favela and suddenly I’m in. So, for our second day in Rio, that’s just what we did.

Now, for reasons I hope are obvious, it is not recommended that naive tourists just wander into a favela on their own. Fortunately, there are a number of companies and individuals who offer favela tours. As with our city tour the day before, we decided on Be A Local.

Be A Local, and our guide for the day Daniella, picked us up at the hotel and drove us over to Rocinha, Rio’s largest favela with a population of over 200,000. Like many of Rio’s favelas, Rocinha is built on a steep hill not far from downtown. Rocinha has 1 road that winds its way up the centre of the favela. The road has many of the amenities you would expect to find on the high street of any town: a bank, medical services and even a McDonald’s.

Parental Advisory: If you’re my parents, don’t read the next four paragraphs.

Rather than try and navigate up the busy, narrow, winding road in the van, we were dropped off at the bottom along with about 10 others in the group. As we got out of the van, Daniella asked that we put our cameras away for the next portion of the trip and that she would let us know when it was okay to take them out again. Odd you say? Well, the thing is that drug dealers don’t appreciate having their pictures taken at work, even unknowingly. I can understand that. I mean, I don’t know that I would appreciate someone showing up at my desk and taking my picture uninvited. Of course in my case, the picture is unlikely to end me up in jail and I’m also less likely to shoot you. It’s not that the big drug lords were just sitting at the favela entrance. It’s their peons, the watchers. If you’ve ever seen the television show The Wire, think of the kids sitting on the couch in the middle of the projects. Regardless, we were all more than willing to listen to this little tidbit of advice from Daniella.

Cameras safely stowed, it was time to head up to the top of Rocinha. Would we walk up, you ask? Why no that wouldn’t be nearly adventurous enough. Instead, one by one, we hopped on the back of waiting moto-taxis while Daniella paid them and explained where they should drop us off.

Having broken my collarbone about 8 weeks earlier falling off a human powered bike on a dry path with no traffic, I hope you won’t think less of me for being a little nervous about hopping on the back of a motorcycle to swerve my way up a busy, wet hill at almost the same speed. Oh and this time, without the helmet that saved me in the first crash. As they say, don’t try this at home kids. But, when in Rio, do as the Cariocas (residents of Rio).

With an elevated heart rate, and a white knuckle grip on the little handle behind the seat, my driver and I set off up the hill. I have to say, if it weren’t for the open wound in my chest, and fresh memories of how it got there, it would have been pretty fun. For her part Katy didn’t have the collarbone fear, but she did have her own dilemma, one that is a good lesson for female and Scottish kilt-wearing readers: skirts make getting gracefully onto the back of a motorcycle a little tricky.

In the end everyone made it safely to the top and we headed into the narrow laneways of the favela. Our first stop was a house at the top. One of the interesting things about Rio’s favelas is that many are built on land that offers some of the best views of the city. Unfortunately, the clouds rolling in limited our view.

The surprising thing about the house was that it was, well, a house. This was no shack built with corrugated metal. It had multiple rooms and multiple stories. While we were checking out the view, Daniella explained that houses at the top of the hill were the most coveted. Why? Well, if you’ve ever been to Edinburgh and taken a tour of one of the many closes you may be thinking the same thing I did, “shit flows downhill”. And you would be right. Not only does garbage tend to run down through the houses when it rains, many of the facilities are overburdened so you get less of what you want (e.g. water) and more of what you don’t (e.g. sewage) at the bottom.

As we walked through the laneways (I don’t know what else to call them) one thing that stood out was how friendly everyone was. Anytime we passed someone, whether they were walking by or just sitting in a window, they would offer a friendly hello, a smile, or in the case of the kids, their best mugging for the camera.

One of the highlights of the tour was a stop at an art studio. It was set-up by some of the residents to give kids a place to learn how to paint and provide them with an alternative to getting involved in gangs or crime. One of the paintings by a young artist name Jean caught our eye. Fortunately for us the artist himself was around for a picture when we bought the painting.

Then we were back on our way through the favela. Favela walking is hard work, so we stopped at a bakery to grab a snack and had a chance to see some of the smaller homes near the bottom.

The homes are so crammed together that they seem to come from everywhere with one piled on top of another. They were so close to where we were walking that it was hard not to look right into their living room/kitchen/bedrooms. 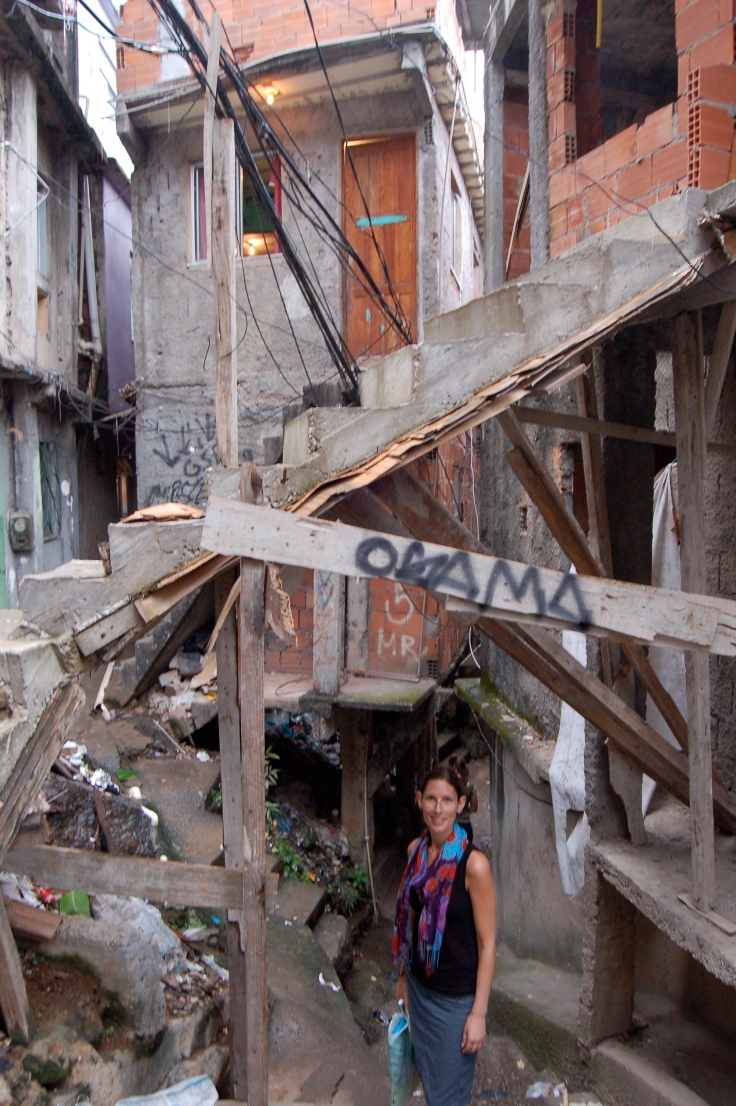 You might wonder who lives in Rocinha and why they choose to live there. The majority of people, drug dealers aside, are the working poor. They’re the people you see working in restaurants and hotels around Rio. As is probably the case where you live, a big factor in why is location, location, location. We were surprised to learn that in Brazil employers are required to pay for their employees’ transportation. Living in the favela, close to downtown, makes them cheaper to hire than those living in the suburbs who might need several buses to get to work.

The only downside of our time in the favela is that we were there on a Saturday so we didn’t get a chance to visit the daycare that Be A Local supports. According to Daniella, 60% of the tour fees go to supporting the day care. The day care gives kids in the favela access to education, health care and nutritious food. It’s also supported by the non-profit Planterra. You can read more about it here.

Leaving the favela meant stowing the cameras again as we passed by the lookouts. Then, in a matter of steps, you’re back into the busy traffic of Rio.

Exploring a favela might not be a typical stop for visitors to Rio, but maybe it should be. I think it’s always worth going somewhere you have preconceptions about. Just because everyone ‘knows’ something, say that favelas are dangerous, doesn’t mean it’s true. You just might find yourself going for a walk in a really interesting and friendly neighbourhood.

3 thoughts on ““Take all the pictures you want, except of the drug dealers.””