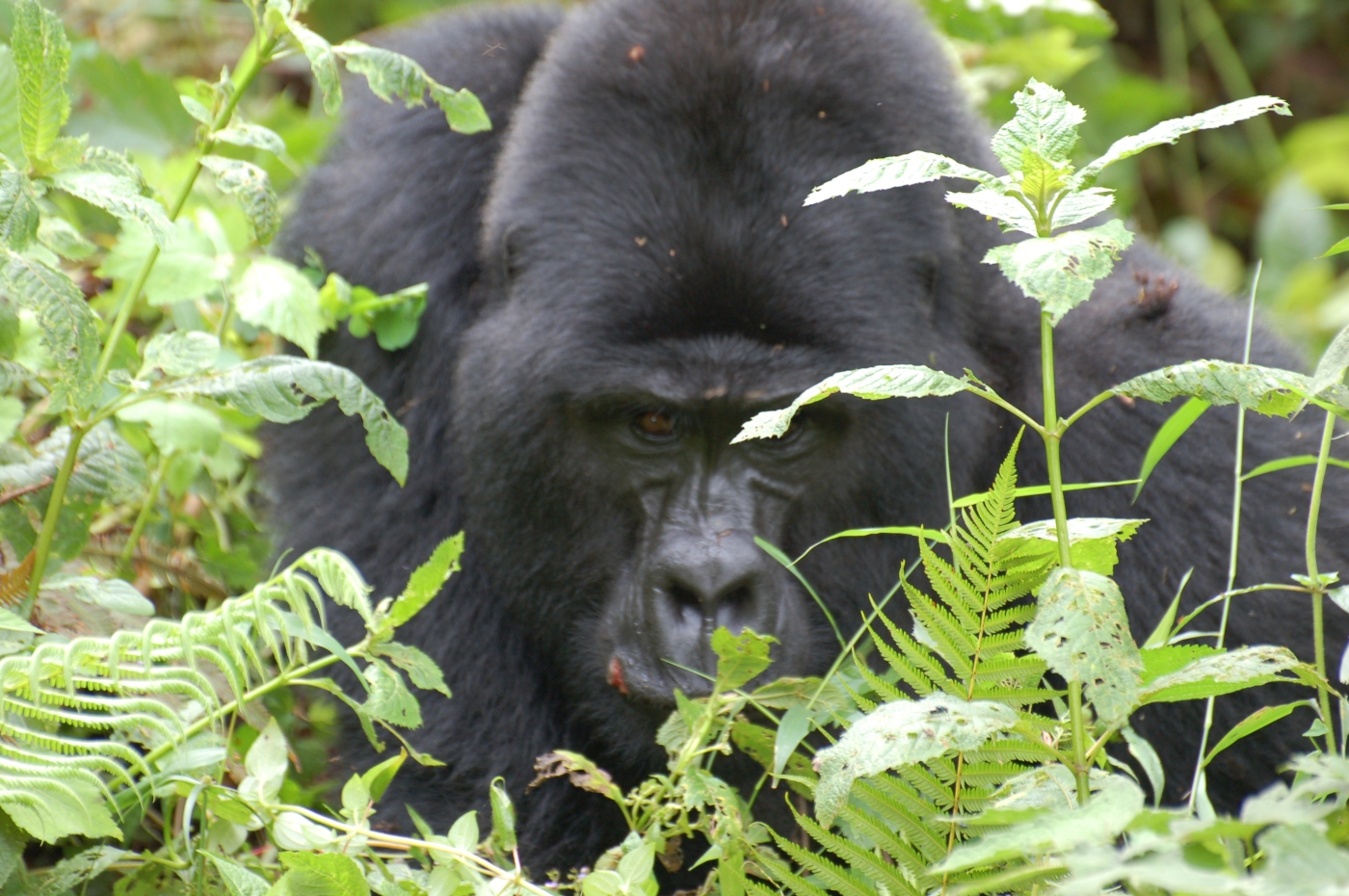 What would you do if a silverback gorilla suddenly charged in your direction? When we went gorilla trekking in Bwindi Impenetrable National Park in Uganda that question became more than an interesting hypothetical for Katy and me.

I hope you’ll forgive the picture above being a little out of focus. Part of me honestly thought it would be the last picture I ever took, and I’m not great with my camera to begin with. Fortunately it turned out to be one of the most memorable photos instead.

So, how did I end up face-to-face with this rather stern looking gorilla? And what did Katy do while I was taking this picture? I’m glad you asked.

When we decided to go to East Africa, a gorilla trek was at the top of our list of things to do. Our day visiting with the gorillas started in the early morning of a cool and misty day in Kisoro. Kisoro is located in the southwestern corner of Uganda, about 500km from Kampala, where Uganda borders with the Democratic Republic Congo (DRC) and Rwanda. We left the Travellers Rest Hotel, a place Dian Fossey is said to have called a second home, and headed toward Bwindi Impenetrable National Park. At the gate we checked-in with the park rangers and joined a group from France.

We were given a briefing by the park rangers who outlined how the day would go and explained the rules for visiting the gorillas. Here’s the short version: “Gorillas are way bigger than you and you’re guests. We’re visiting troops that are used to humans. So you’ll be tolerated, just don’t push your luck. They’re also highly endangered (there are only 800 mountain gorillas left) so it’s important that you don’t touch them with your grubby hands.” One of the things we learned is that if any of the gorillas show aggression towards you, especially a male, don’t run. Curl up in a ball and be submissive. With that, we set off in trucks to where we would start the hike.

After we jumped off the truck we were told to tuck our pants into our socks. Ostensibly this was to keep bugs out of our pants, but I suspect it’s to put the gorillas at ease. I mean, would you be intimidated by such a goofy looking bunch?

The rangers work in teams. As we set out, other rangers had already been out in the bush for a few hours trying to locate the troops to increase our chances of finding them. At first it was a pretty leisurely walk in the park along a nice path. That didn’t last for long. Soon our guides were getting radio reports with directions on finding the troop and we headed off into the bush. Suddenly the “impenetrable” in Bwindi Impenetrable forest took on new meaning.

I have to admit, I enjoyed this part. Here we were sliding down hills, crossing rivers and hacking our way through the thick jungle in search of gorillas. Ok, they wouldn’t let me near the actual hacking. Still, definitely a little more exciting than sitting at my desk in Toronto, ok, worse, Mississauga.

About 45 minutes after we left the trail, the guides said we were coming up on the gorillas and should get ready. We dropped our packs and left behind anything reflective that might bother the gorillas, or be too interesting. We pushed a little further through the bushes where we found a troop of about 15 gorillas spread out on the hillside.

At this point we were about 20 metres from the closest gorilla. It’s hard to talk about actually encountering the gorillas without using cliches. It really is an awe inspiring experience. They are massive, yet calm. They lumber when they move, yet it’s graceful.

Before too long they decided to move on. At this point, I thought our day was done and I was pretty satisfied. After all, when you set out in the morning there’s no guarantee that you’ll actually catch-up to a troop, and we’d done it relatively quickly. Fortunately, this trip was far from over.

Our guides told us that in this thick forrest, every 10 minutes a gorilla is on the move it will take humans about an hour to cover. Despite this severe disadvantage we set off after them. To be honest the 6:1 speed comparison probably doesn’t give the gorillas their due. Watching them move away it seemed like it would be no big deal to keep up. In truth, it was as if they were walking on a paved path in summer, and we were climbing up an ice covered hill with ballet shoes on. Needless to say, we all spent some time on our rear ends.

In the end, it was worth every slip and slide and after an hour or so we caught up to them. I can’t even really say how it happened. All of a sudden, there they were. This time they weren’t on a hill side 20 metres away, they were right next to us… in every direction. Time for another cliche, their eyes. Everyone who tells you that it’s like looking into the eyes of another person is exactly right. There’s no other way to describe it.

They don’t do the experience justice, but these pictures do a better job then my words:

So, back to our little run-in with the silverback. As we moved quietly amongst the gorillas, Katy, another woman and I eventually came upon a non-dominant sliver back sitting a little ways off from all the others. He was sitting below us with his back to us. He noticed that we were there but seemed pretty comfortable and just kept eating. Or so I thought. Apparently, my ability to read gorilla body language needs some work. What he was really thinking was, “if these hairless losers with their socks tucked in their pants don’t back off, I’ll show them ‘non-dominant’.”

Before we knew it, he went from peacefully eating leaves to moving rather aggressively in our direction. As Katy will tell you, I’m a rule follower. So, when he charged, I curled up into a ball as we had been told before we started the hike. Somehow, I managed to take this picture on my way down.

Katy? Less of a rule follower. She and the other woman took off running back to the group. As our new friend settled back to his snack and I finally looked up, I found myself curled in a little ball alone. Eventually, I confirmed that I had managed to avoid peeing my pants and joined Katy and the others.

For their part, the guides showed the care and sympathy we were due… they only laughed for about 10 minutes.

It’s not the cheapest thing we’ve ever done but visiting the gorillas in Bwindi was definitely one of the best. If you ever have the chance, do it. We’d do it again in a heart beat. Actually, it’s on the agenda for when we make it to Rwanda.

A little bonus. Sure, we got close to the gorillas, but this guy got much closer. Watch.

5 thoughts on “Did I ever tell you about the time we were charged by a 400lb Gorilla?”