How is Vancouver, a cold and rainy city in the great white north, like a global financial centre in the middle of the dessert? In both you can often ski in the morning and play golf in the afternoon. Having explored The Atlantis, and gotten over our jetlag, we decided it was time to set out and sample some of what modern Dubai has to offer: indoor skiing and the world’s tallest building, which also took us to the world’s largest mall.

It’s not often that you wake up, check the weather outside, see that it’s already close to 40 degrees Celsius at 8:00 am, and think to yourself, “yep, time to go skiing”. Yet, there we were at 9:30 in the morning sweating in a cab on our way to the Mall of the Emirates to go skiing.

When we decided to come to Dubai, we figured that we would go all out and do some of the more crazy things on offer, like indoor skiing at a mall. As it happens, it was a ton of fun.

The whole experience is somewhat surreal. You wander through a mall and then all of a sudden there are signs for a ski shop and a restaurant called Après Ski. Through the window behind the restaurant is, oddly enough, a small ski hill.

After paying for your two hour lift ticket – which by the way was a very high tech lift ticket that told you how much time you had left each time you swiped it for a run – you see the clothing people who give you some snazzy ski suits and sexy grey socks. Thankfully, the socks are yours to keep. After that it’s on to the boot guy who hands you a pair in your size and sends you off to the ski guy. The ski guy looks me up and down, pauses and says, “175s?” to which I respond, “sure”. Then he takes my boot sets them in the bindings and gets ready to set the DIN, pauses, looks up at me and says, “you are an advanced skier?” to which I respond, “sure”. We both smile knowingly, he probably knowing more than me, and I’m ready to go skiing, mostly. When I ask about poles he says, “top of the escalator”. This time I say nothing, but think, “of course the ski poles are at the top of the escalator…” (Side note, if you hit the TGI Friday’s, you’ve gone too far.)

They say there are four runs at Ski Dubai, but I could only count 3. I think the fourth comes from counting the bottom half of the one run twice, because you can get off the chairlift halfway up and ski down from there. They also say that they have the world’s first black diamond. If you have ever skied before, they don’t. It’s a blue square at most, and it’s at the low end of that too.

Despite the oddities, we had a great time. The snow was remarkably good and it wasn’t too busy. We did watch one kid bail hard in to the safety fence, shortly after letting out a sharp, “Shit!”. But he was fine, so it was hilarious. I think he got kicked off the hill after his ride of shame down the chairlift to the bottom.

The only thing I would recommend you do that we didn’t, should you find yourself at Ski Dubai, is bring some little gloves. It’s not that cold, and they’ve got you covered with the jacket and trousers, but it does get a bit chilly on the hands. I also felt a bit like a yeti out there with no gloves or hat. Any closer and I would have had jeans and my jacket open.

Smarter than Tom Cruise, we took the elevator

After hitting the slopes, the next logical step is to hop on the metro to the world’s biggest mall and go up the tallest building, so that’s what we did. The metro, which opened in 2009, is very nice. It’s completely automated and incredibly clean. The highlight for me though is the futuristic above ground subway stops. Like much of the new architecture, they’re really interesting. Time will tell, if that turns into tacky in 10 years.

The metro dropped us off about 400m from the Dubai Mall. This being Dubai, you don’t walk the rest of the way, but instead take a short bus ride to the door of the mall. It’s not that we didn’t think about walking, the city’s just not set-up for it. One of the main design themes here seems to be minimizing the amount of time you have to be away from air conditioning.

The Burj Kalifah, completed in 2009, was built in 4 years. It is 818 meters tall and a trip to ‘At The Top’ will take you up to the 124th floor observation deck. Of course, it wouldn’t be Dubai if you didn’t take the world’s fastest elevator to get there. It was easier than climbing up the outside like in the latest Mission Impossible movie. To tell you the truth, the elevator ride might just have been the best part. The elevators are in the interior of the building, so you can’t see outside. This could have made for a boring ride. Instead, as the elevator starts to climb, the lights go out, and a light show starts while a screen counts as the floors speed by. It’s a bit over the top, but it works.

The view from the top is a testament to the crazy growth and infrastructure development underway here in Dubai. There are construction cranes in every direction, ending only where the desert begins. In the distance, through the haze and pollution, you can see the Palm Jumeirah. Next to that you can also see The World, the another mega project involving the construction of islands, this time in the shape of all the continents of the world. Apparently, if you have a few million dollars kicking around, you can pick up a country now before they’re all gone. 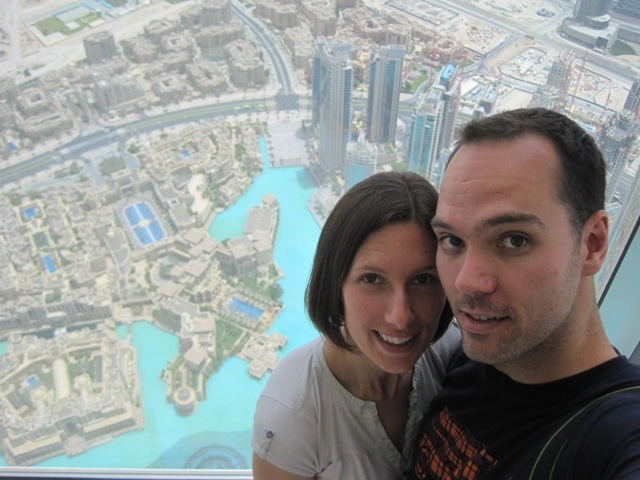 After making our way down the tower we walked around the mall a little bit before stopping for some lunch. The mall itself, despite the size feels just like a mall. A fancy high-end mall, sure, but a mall nonetheless. I will admit that we didn’t visit the aquarium or ice rink, but shopping in a mall isn’t really my idea of fun.

For lunch we stopped at a Lebanese restaurant with a patio outside next to the large fountain. Our timing couldn’t have been better because just as we sat down, the fountain show started. Not surprisingly, the fountain show is the largest in the world. (Can you tell, I’m experiencing some “world’s whatever” fatigue when it comes to Dubai?) We have video, but that will have to wait until we get home.

After all of this biggest, tallest, mostest, it was time to head back to the hotel to relax and soak up the last of the luxury and have a little fun on the beach. Up next, we’re leaving The Atlantis for a hotel in Bur Dubai. 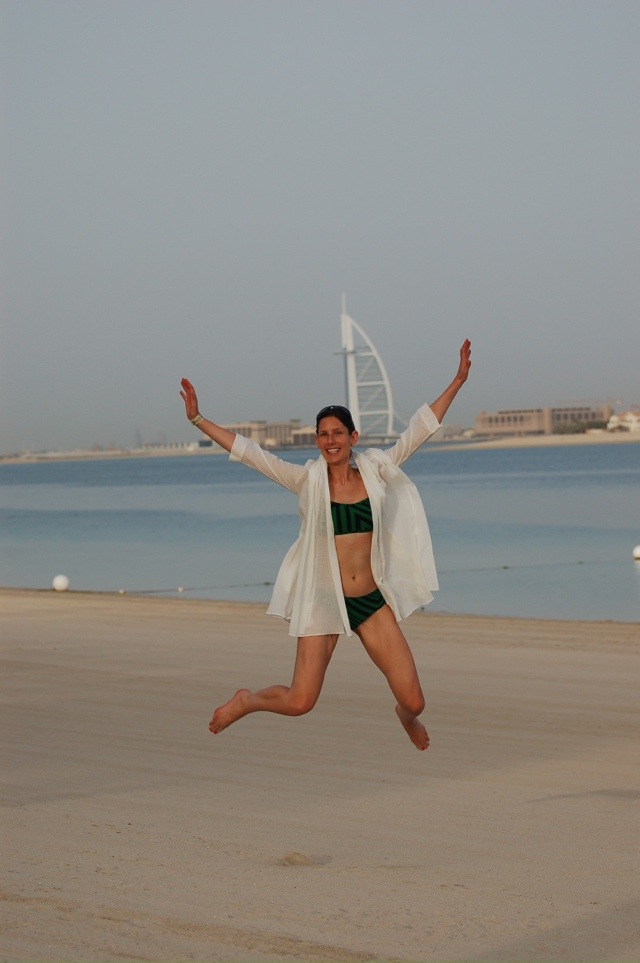 5 thoughts on “How is Dubai like Vancouver… Skiing in the morning, golf in the afternoon”