It turns out that we didn’t book a hotel room in Curacao, we booked a house. Ok, we knew that what we had booked was a separate little villa, but it’s way bigger than we would have imagined and definitely bigger than our old condo. We also had no idea how many families with babies we would find here. The place is literally crawling with them. (Bazinga!) 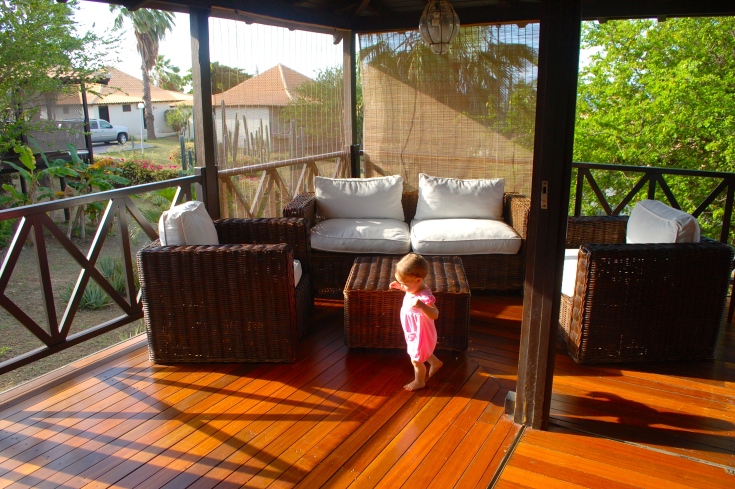 “Oh, that’s where the Dutch stay”

Someone had mentioned in passing to Katy, while she was booking some transfers, that they were surprised we were staying here because it’s typically where the Dutch stay, not the North Americans. Apparently, as we learned from our guidebook the other day (what, you actually read them before you visit?), the Dutch tend to stay in what are essentially apartments and allow for more self-service, e.g. they have kitchens, whereas Americans and Canadians typically stay at the hotels in the big US chains. In case you’re wondering, we’re staying at the Papagayo.

I have to say, this approach has had a number of benefits. First, with Ella napping twice a day and going to bed a bit early for us (though 8:00pm can be sadly tempting) it’s great to have separate bedroom so we aren’t trapped trying to sit quietly in the washroom so she can sleep. It also means that the little terror has plenty of room to run around and wreck things, though we do need to make sure she doesn’t slip through the fence on the veranda. Lastly, it’s very convenient to have a kitchen and fridge. Not only does it make it easier to store food for Ella (and drinks for us), it means we can make our own breakfast without the production that is taking her to a restaurant.

Did I mention, we have a hammock?

Despite the self-service nature of the villas, they’re still more than happy to bring dinner from the restaurant up to us if we don’t feel like cooking or going out (for the same price as eating at the restaurant) and we are within walking distance to several other restaurants at the beach.

For our first full day in Curacao, we decided that we wouldn’t stray too far from the villa in the hope that Ella might get back into her sleep groove despite the travel day and 1 hour time change. After her morning nap we headed down to the beach club to take Ella for a swim and get some lunch. The beach club is part of a group of restaurants and facilities on… well, the beach. They’re all connected with a small narrow boardwalk which proved to be quite handy as it made it easier to keep tabs on Ella. Why? Well after her first foray wandering into the sand, she discovered that she did not at all care for it. As a result, she would wander in straight lines along the path.

Though you could go in the ocean, we opted to start off with the saltwater infinity pool that looks like it flows right into the ocean.

In the evening, we headed back down to the beach to try one of the other restaurants, Zanzibar. Don’t worry, very different from the one in Toronto. We had a nice beach front table with a view of the setting sun. Of course, the boss would have none of that. She’s all business where food is concerned.

One thought on “The Dutch might be onto something”