If Helsinki is a city dropped in the middle of what we would think of as beautiful cottage country, what do you call a coastal retreat that to which you might escape from Helsinki? Hanko. 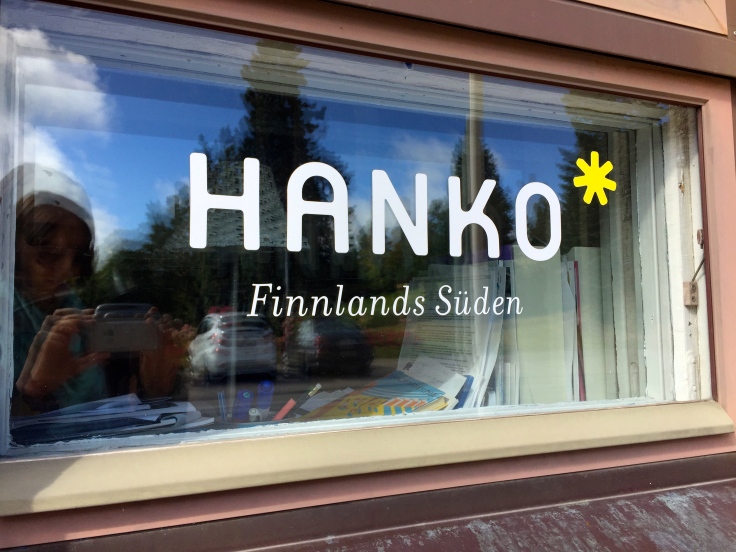 After a few days of great weather we woke up to grey skies and cold rain. What should you do on a cold and rainy day in Helsinki? Beats me, we got in our rental car and headed west along Finland’s southern coast to visit the small town of Hanko.

Despite the rather dismal weather, we decided to stick to our plan to stop and visit Raseborg Castle along the way. We were glad we did because, and this is a bit of a bold claim, but I think that this might just be my favourite castle.

Anyway, I’ve been to a castle or two in my day, European, Middle Eastern, but there was something particularly interesting about this one. Maybe it was the combination of the weather and the fact that we had the place all to ourselves. Maybe it was Ella’s enthusiasm at showing us around. Whatever it was Raseborg just felt, for lack of a better word, cool.

One of the most interesting things about the castle is that, while we walked to it through the forest, when it was built in the 14th century, it was completely surrounded by water (picture below). What you can’t read in the sign is that in it’s heyday, the castle was a strategically important fortress by the sea for the Swedish crown and even served as the base for the deposed Charles the VIII and his court. 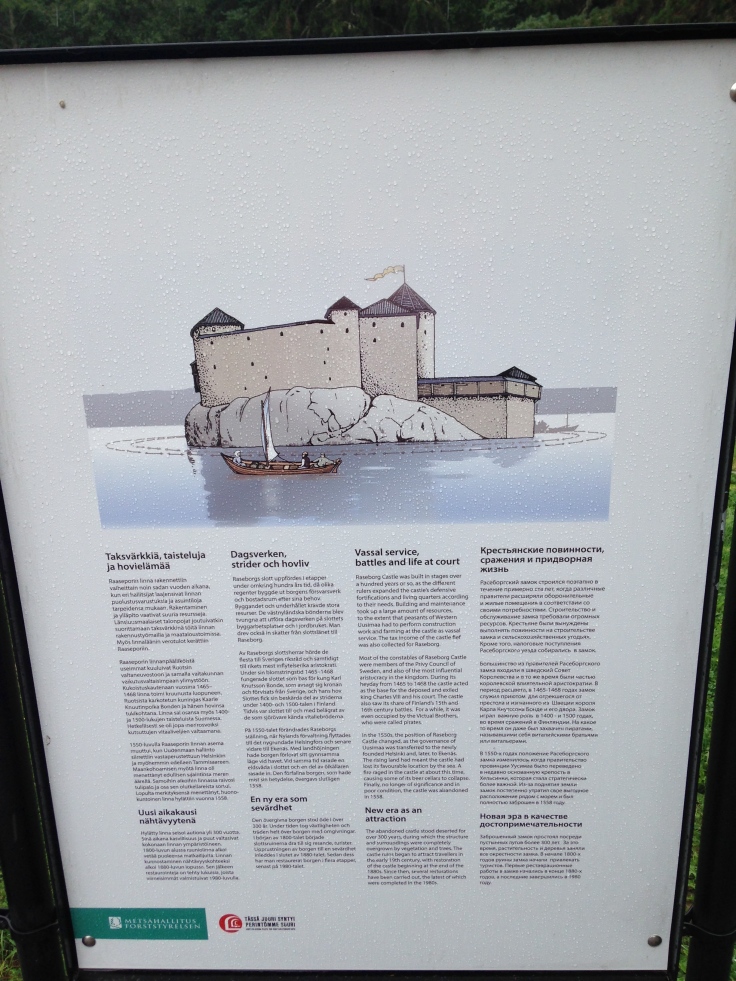 From Raseborg it was just a short drive to our destination for the weekend, Hanko. Breaking with our norm these days we had booked a room at the Bulevard Hotel rather than an Airbnb apartment. Cost and availability were the driving forces, but the fact that the Bulevard is actually a converted prison made it an interesting alternative. Once again, Katy’s good planning and a little good luck meant we couldn’t have asked for a better place.

The hotel was actually rather like a B&B. It’s run by a lovely family who moved to Hanko from Helsinki a couple of years ago and many of the rooms don’t have bathrooms, though our adjoining “family” rooms did have one. Breakfast is included and Henna (not sure about the spelling) and her family were super nice to us and made sure we had a great stay.

After lunch and getting Ella settled in for a nap, Katy and I took turns going out for runs. I lucked out, going second, and chose to head east which meant less ship yards and more path and trail running, my favourite. It also meant stumbling upon an old bunker. It seemed oddly placed, especially with no other signs of military remnants (to borrow a Vietnamese word) around.

By this point the clouds had cleared and it had turned into a lovely late summer afternoon. Perfect for a little trip to the beach before heading to one of the restaurants along the harbour.

The next morning we decided to head out for a bike ride to explore the 19km bike path that runs around town. There are a couple of companies that offer bike rentals but one never responded and the other didn’t have child seats. Fortunately, Henna came to the rescue and offered Katy hers, including a child seat, while I took one of several that the hotel provides to guests. All at not cost, which is particularly nice in what we’ve found to be a relatively expensive country so far. 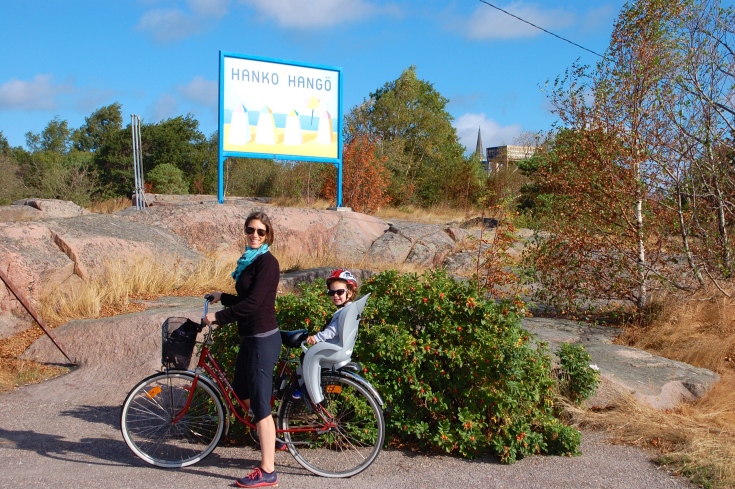 I was particularly excited by my bike, an old Finnish military bike. It was comfortable and rugged as hell, but definitely not built for speed. In fact, cruising along on that, I think I now understand how people can ride to work without working up too much of a sweat. I just might have to see if I can get my hands on one back home. Maybe a slightly bigger one though.

After our ride we still had time to for an obligatory visit to the local playground, a quick stop at the street fair and a trip up the water tower before some lunch and a much needed nap.

Who doesn’t love a good bonfire

It just so happened that we were in town for Hanko Days and the Night of the Bonfires. I can’t say that Hanko Days wowed us with activity and hustle and bustle. There was a street market/festival but we largely missed it while we were out on our little bike ride. However, on that bike ride, we had a revelation. We have the power to control time!

You see, as is often the case when we travel, we tend to be a little more lax on getting Ella to bed according to schedule. Our desire to go see the bonfire and fireworks that evening, which didn’t start until after 9:00 (9:30 as it turned out) meant that we would be pushing this to new levels. Then it occurred to us, she can’t tell time. The days are much longer here so it’s not like the sun’s a clue. There’s no reason we can’t shift her whole routine another hour. We’d still miss it for the fireworks, but not as much and we’d get to sleep in a bit in the morning.

With that settled we headed to the beach. Hanko had been pretty dead to this point, but apparently a big fire brings out the town. The beach was busy when we arrived. Live music. People of all ages and a packed patio at the little bar. We staked out some space on the beach and waited. It took a while but the bonfire and fireworks were pretty impressive and worth the late night. Even if Ella was a little thrown by the drunk older gentleman trying to speak to her in Finnish while we waited for the bathroom. 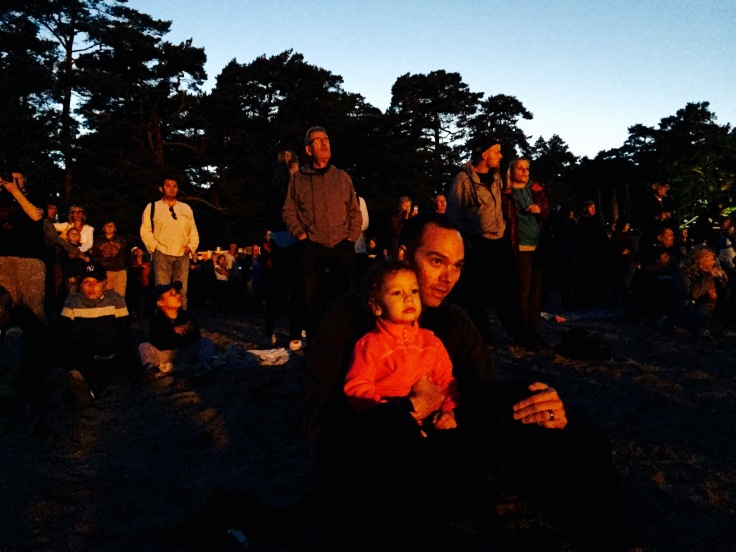 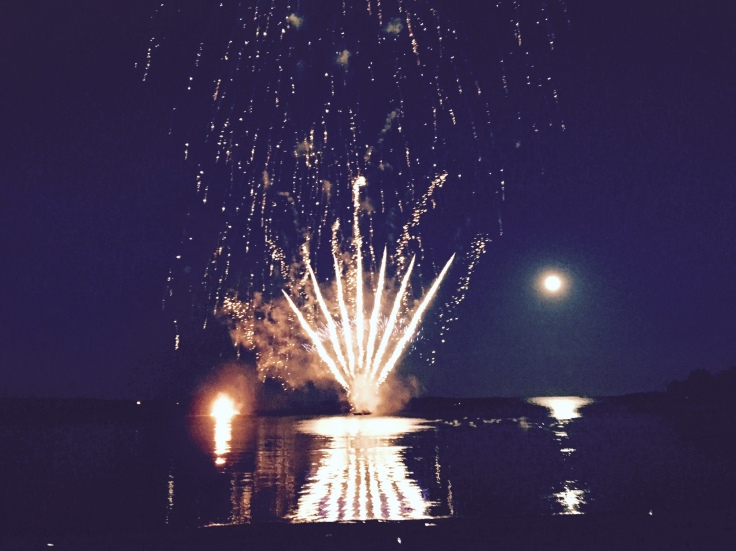 p.s. In case you’re wondering about the title, we found some t-shirts in the tourist shop that said Hangon Keksi. We liked them and asked what it meant. Apparently there used to be a cookie factory in Hanko and it seems like this was their tagline. We were told there isn’t a Finn around who doesn’t think of Hanko when you say it. More on the history here.