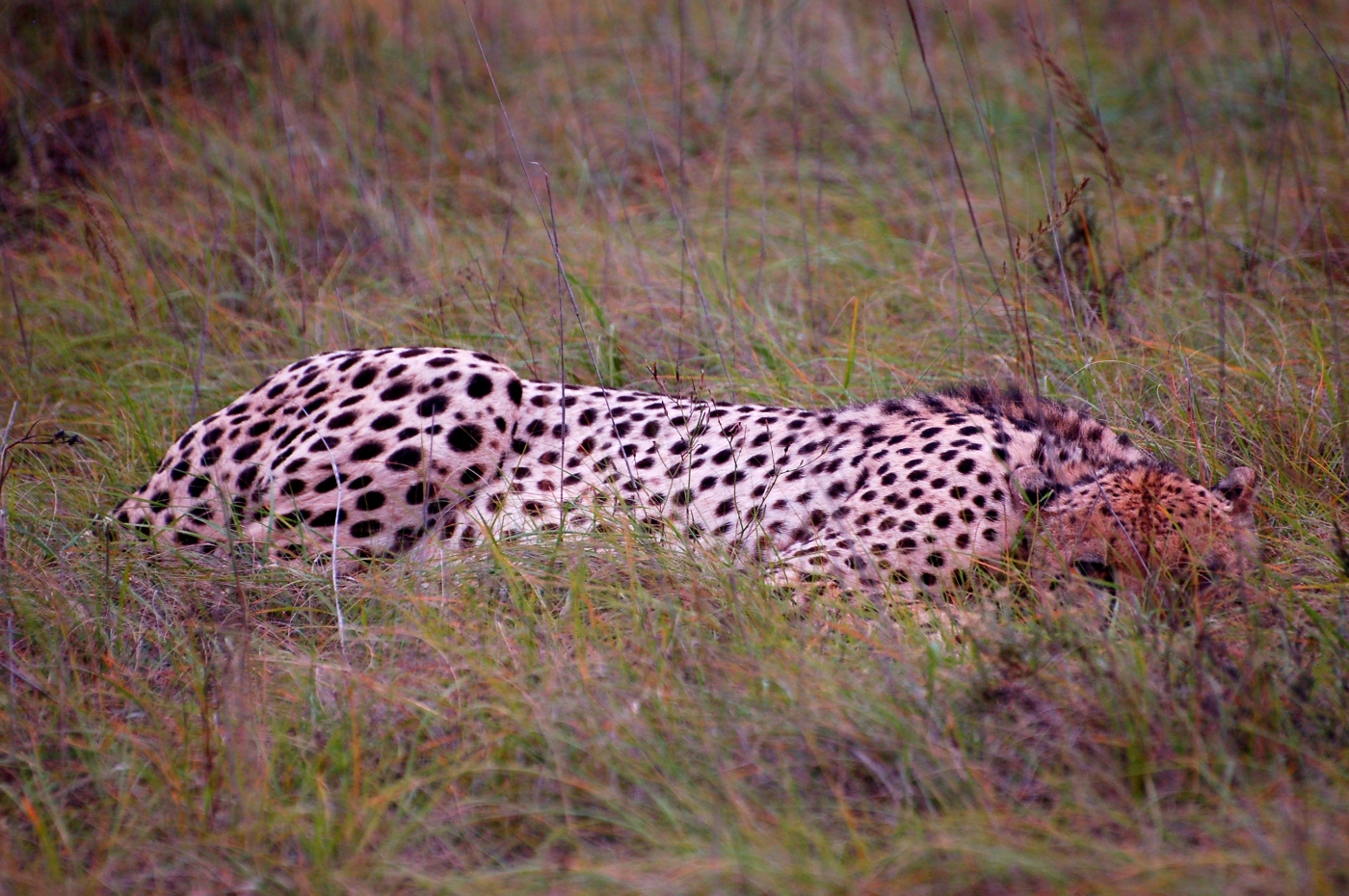 “Hmm, if we could stop, it might be time to think about turning around.” Those were my thoughts as our taxi fishtailed down a dirt road about 15 minutes after we had entered the Shamwari Game Reserve and passed the signs that said, “Wild Animals. No fences. Drive carefully.” I’ve pushed a car or two out of a ditch in the snow in my time, but I’d never had to do it with the the possibility that I was being stalked by a lion or cheetah before.

To this point, our trip from Cape Town to the Shamwari Game Reserve had been going rather smoothly. Our taxi showed up as planned and we had no trouble getting to the airport. We were through security with plenty of time. Ella was great on the flight as usual. The one bag we checked arrived in the right city at the right time. Finally, the transfer we had arranged to take us to Shamwari was waiting as we walked out of the rather sleepy Port Elizabeth (PE) airport. Even the drive from PE to Shamwari was smooth, at least until we turned off the highway on to the dirt road and it started to rain.

We could tell the driver wasn’t entirely sure where he was going, but we eventually reached a big gate with a large “Shamwari Game Reserve” sign and things seemed back on track. The guard signed us in (security is tight because of rhino poaching) and we headed off to find our lodge.

We drove past signs for various lodges while the rain came down and the roads increasingly turned to mud but we carried on. We drove past some giraffes, “neat” we thought, pointing them out to Ella. Then the van started drifting across the road.

Thankfully, at just that point, a ranger showed up in a Land Rover with a mildly confused and slightly concerned look on his face. When we finished skidding to a stop he asked where exactly we thought we were going. As you’ve guessed by now, we were not heading to our accommodations at the Riverdene Lodge, but deeper into the Game Reserve in a van that had no business going there. A slow and careful u-turn and one more wrong turn later we were back on our way and did eventually make it to the lodge.

Your ranger will be JJ

After arriving, we had a couple of hours to rest before we jumped right into things. Well, at least Katy jumped in. While she headed out for her first game drive that afternoon, Ella and I opted for a more gradual approach.

Though the lodge did offer child minding, we decided that leaving Ella back at the lodge for 6 hours a day during the game drives wasn’t really in keeping with the family vacation ideal. So, Katy and I decided to alternate. Katy took the first drive that afternoon and I would get up at 5:30 for the morning drive the next day. See who’s smarter.

Ella and I took advantage of the playground. 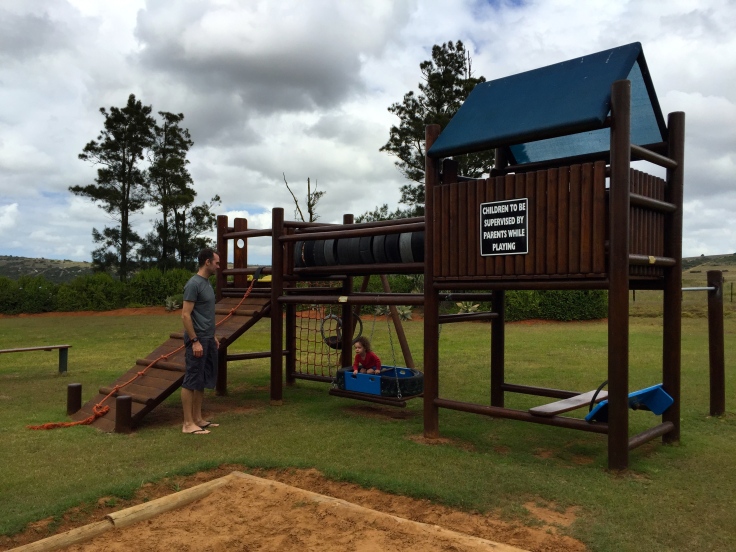 The Shamwari Game Reserve includes about 25,000 hectares of land and there are several lodges within the reserve. The nice thing is that they’re all relatively small. Ours, Riverdene, was typical in having only 9 rooms. Of those, they had graciously given us an adjoining room for Ella at no extra cost so we had 22% of the rooms.

This small size offered several benefits. We were at the family friendly lodge, so not only were the staff very accommodating of kids, almost everyone else had kids so they were too. Despite all these kids, the lodge was pretty quiet and it wasn’t hard to get some space in and around the pool.

For Katy and me though, the best part was that our room was within 25 meters or so of the dining room. Why does this matter you ask? (Ok, if you read the subhead you probably didn’t ask, but humour me.) It matters because our decision to carry the baby monitor all the way to South Africa paid-off in the form of several child free meals after Ella went to bed.

Experience is great, but luck helps too

I was a little jealous after Katy had gone out on the first drive because she had seen a cheetah up close. Though we had seen one in Tanzania it was little more than a spec on a rock so I was worried I’d missed the one chance. She’d also see two lions just minutes from our lodge who were midway through devouring a buffalo. She’d set the bar pretty high, so when I headed out the next morning, I was hoping my drive would be as interesting. It certainly started well.

No more than 5 minutes down the trail from our lodge, JJ pointed out drag marks across the dirt road. He mentioned that this is where Katy had seen the lions the evening before and that they had clearly dragged their kill across the road into the bushes to finish eating it. Then he stopped the truck, hopped out and went to have a closer look at the marks. He’s grown up here and spent 15 years of his life working as a ranger in 5 big parks. Who am I to question the wisdom of decisions.

He explained the direction they had gone (though that seemed a bit obvious) and even mimed how they would have carried the carcass across the road and pointed out the paw prints. Then he came back, started up the truck and we continued driving. We drove maybe 2 meters past the next bush when we looked to the side and there was one of the lions, just looking at us. The sheepish “oops” look that JJ gave over his shoulder was great. 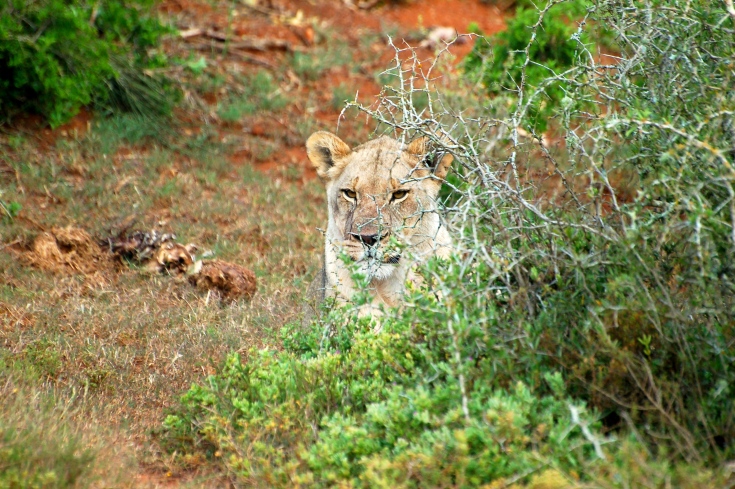 The other great part of the small size was that, of the 6 game drives for which we were at the lodge, we were the only ones in our truck for the middle two which meant that we could bring Ella and not have to split up. They don’t normally take kids under 4 because they might disrupt the drive for others, but if the only people being disrupted are the parents, they, or at least our ranger JJ, were very accommodating.

We left right after Ella’s nap on the second day with the expectation that we might have to cut the drive short. In fact, Ella was great and we ended up being out for 3.5 hours, 30 minutes longer than normal. With her trusty Rhino, a welcome gift from the lodge, Ella was quite at home on the drive.

As JJ explained, the drive might be a little different with Ella as we might have to stay away from the “big and scaries”, but it really didn’t put a damper on the drive at all. In fact, watching Ella’s reaction when we first came up to the giraffes was mastercard, I mean priceless. Damn advertising.

Even better, not only did I get to see cheetahs, I got to see them with Ella.

The afternoon drives offered an added benefit. Toward the end of the drive, we would stop at some location with a nice view, hop out of the truck and have a drink (chosen at lunch) and some snacks. With Ella along, JJ took a little extra care to park not just far from some lions, but completely out of sight. I guess Ella makes for an appetizing treat.

Speaking of delicious treats, one of our afternoon stops also meant my first taste of Biltong. Thanks for the recommendation Ashley, it was delicious.

JJ was also kind enough to take us over to the animal rehabilitation centre where Ella and Katy got to feed Lily, a 3-week old baby Impala. If I remember correctly her mum had been found on the side of the road and didn’t make it. While the centre’s aim is only to take on animals that have a reasonable chance of being released back into the wild, Lily spent too much time with humans so she’ll live out her life around the centre. She was pretty damn cute, so I wouldn’t want to give her up if worked there either.

After a long day of drives, sometimes you just need to kick your feet in the pool and look out over the reserve and contemplate what you’ve seen and learned.

If you happen to enjoy an animal picture now and then, you can check out a small sample from our drives by clicking here.

After a few days on the reserve, it’s time to head back to Cape Town and see what trouble we can get up to with Kevin, Vanessa and Nate.

2 thoughts on “Experience is great, but sometimes you need a little luck”