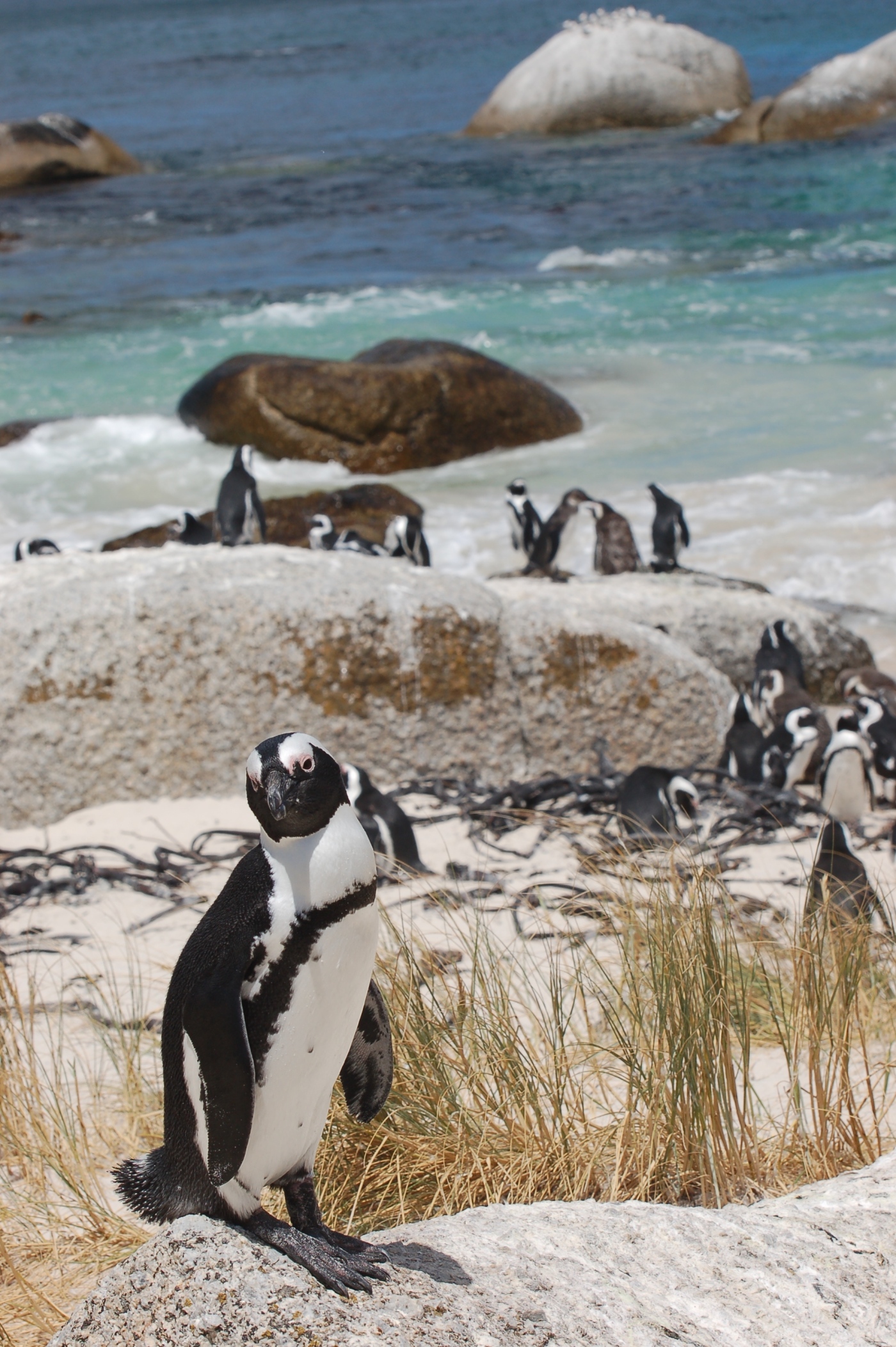 When you tell someone in North America that you’re going to go to Africa and that you’re looking forward to seeing some wildlife, penguins aren’t what come to mind. I understand, you think more Lion King than March of the Penguins. Of course sometimes you speak with someone from Texas who warns you not to get Ebola. Helpful advice.  Then again, Africa is a pretty large continent and Cape Town is much farther from the current outbreak in West Africa than say all of Texas is from the case in Houston… Sorry, that’s a rant for another time.

Back to the penguins. Sure enough, one of the many, many things there are to do in this part of South Africa is to visit some wild penguins. A prospect that got Ella more than a little excited.

With Kevin again having offered to play driver and chaperone, we left Cape Town and headed for Cape Point. The drive down to Cape Point isn’t a long one, but the scenery along the way certainly makes it worth your while to stop a few times and extend it.

Cape Point is not the southern-most point of South Africa, but it is effectively the southeast corner of the country. If I had to guess, I would say that the latitude is 34, 21, 24 south and the longitude 18,28,51 east. That’s just me eyeballin’ it though.

While this may not be the southern-most point, it can feel a bit like one of the four corners of the earth. We lucked out with the weather, and the views were spectacular. 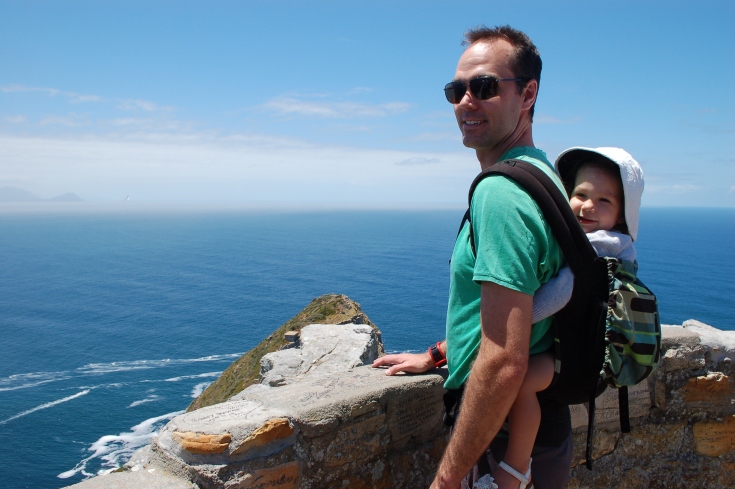 On the way back, we stopped at Boulder Beach to visit with the penguins. If you’ve seen the documentary March of the Penguins then you know it’s great. However, it has very little to do with meeting these penguins. These penguins live more like they moved to Hollywood after the film’s success and took up a sunworshiping, beach lifestyle.

As you can see from the picture above, we got much closer to the penguins than I anticipated. I thought we’d be standing on a cliff up above a secluded beach with a few penguins.

Instead, there was a raised platform that took you right down to the waters edge. Our first penguin sightings were ones strolling along underneath the walkway.

Once down at the waters edge, not only were we closer to the penguins than I would have expected, there were also far more of them.

We even saw a penguin fight. Fortunately, it didn’t amount to much and no penguins were harmed in the making of this picture, or it’s aftermath.

Smart visitors to Boulders Beach will take the time to walk a little extra and visit the second lookout. This one isn’t crammed with other people and as a bonus, you can see those other suckers in the background of your pictures. 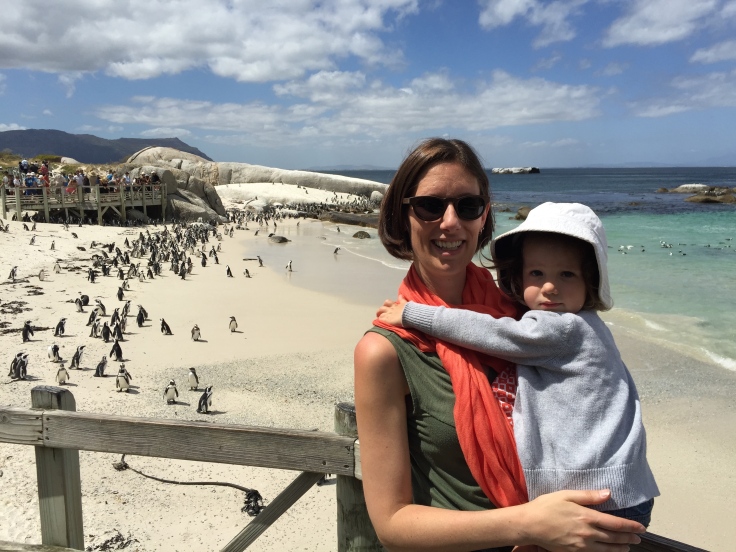 Penguin watching is surprisingly tiring and hungry work. So, there are two things you should do after a visit. First, stop at one of the ice cream shops along the walk back to the parking lot. We went for the quaint little one we would have missed without Kevin pointing it out.

Some of us are better at hiding our ice cream excitement than others.

Second, with all the sugar onboard, feel free to crash on the drive home. Assuming you aren’t the driver that is. 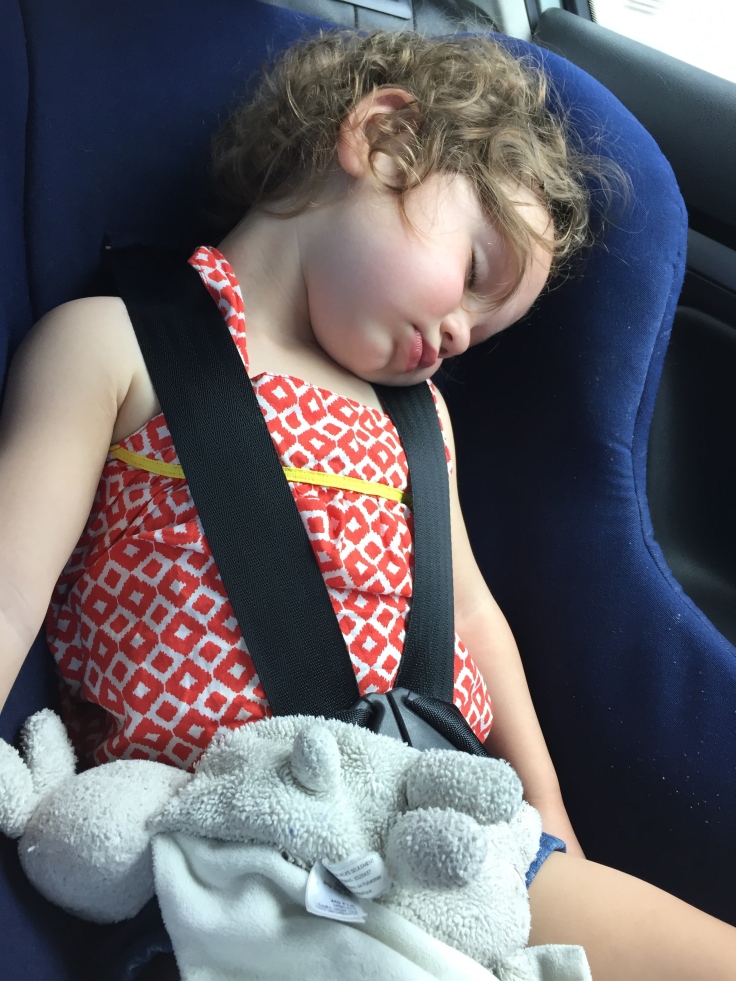 Well, that’s another day in the books. After our journey down the cape peninsula, we met back up with Vanessa and Nate for a lovely dinner at Rick’s Cafe just off of Kloof Street. Tomorrow, we get our our first real taste of the South African wine country.

One last comment before I wrap up this post. The power system here is unique with these massive three pronged outlets. Unique enough that our “universal” power adaptor didn’t have anything to help us here. Kevin lent us one SA to North America adaptor which was great. We also found that the apartments and hotels often had SA to European adaptors for some of the things that they had in the rooms. In one case, this led to our using the arrangement below. What you see is:

One thought on “Lions and cheetahs and penguins… wait, what?!”