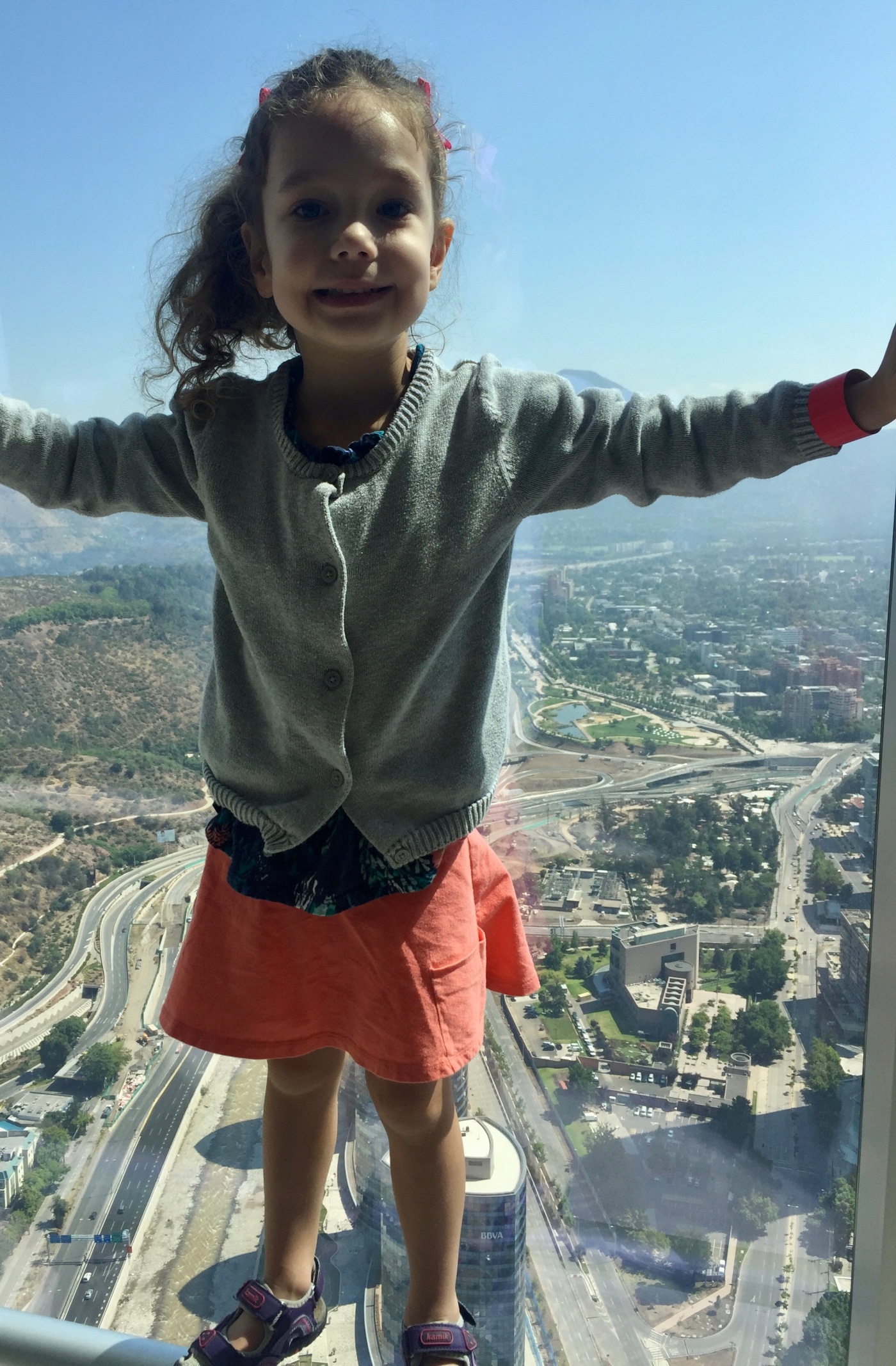 Up next on our Santiago itinerary, Latin America’s tallest tower, a bus and a bike ride around town. 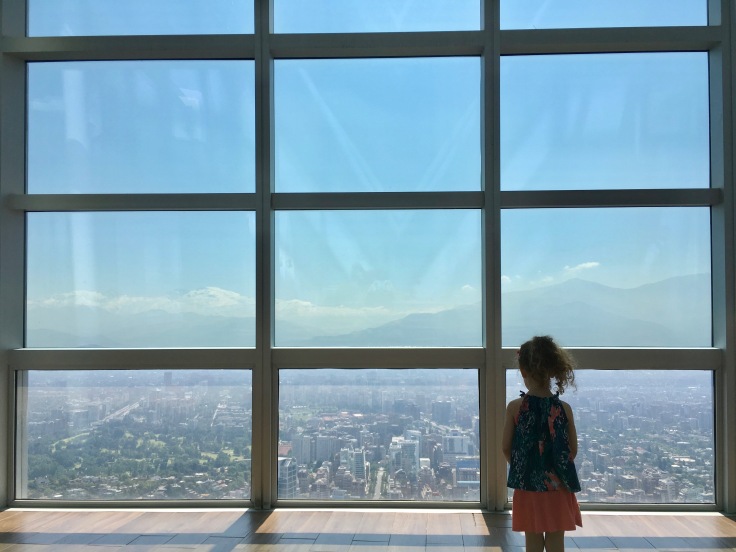 As seems to have become our custom, we decided the best way to have a look around town and get to the tower was a ride on Santiago’s hop-on hop-off bus.

For some reason the local HOHO (new seasonally appropriate short-form) bus company, Turistik, doesn’t accept payment on the bus so you need to go to one of their office locations to get tickets, even if you get them online first. This seemed simple enough so we set off early to catch the 9:30 bus from the stop at Plaza de Armas not far from our apartment. The only problem with this plan is that Santiago is not a morning place. As such, nothing was open and we couldn’t find the Turistik office.

Fortunately, we found the stop and when the bus showed up we explained what had happened in broken Spanish and fortunately the driver let us on the bus. When the other company employee showed up, she explained that the office wasn’t open but that we could ride for a few stops until we arrived at one that was. 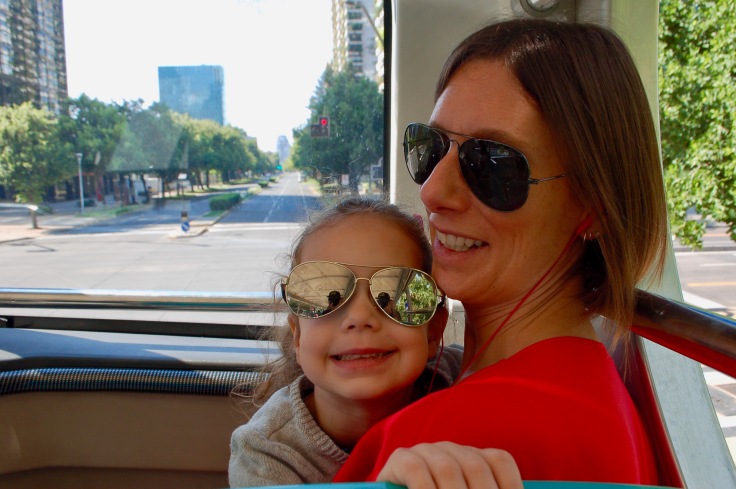 We decided to go to the Gran Torre Santiago which has a ticket office and also happens to be Latin America’s tallest tower. Sure it’s a very touristy thing to do, but we’re tourists. I mean we were on a HOHO bus! 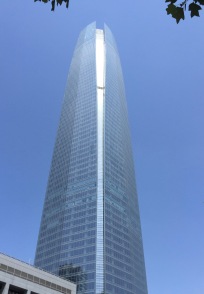 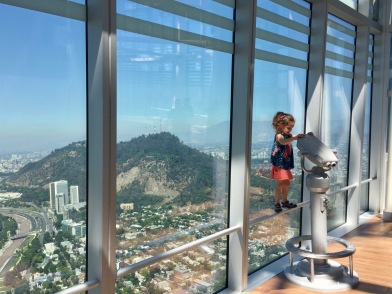 Another strange thing about the Turistik business was that the kiosk to get tickets was located at the back of a mall attached to the tower on the 4th floor. Not exactly what I would think is a tourist hotspot.

This was great for Ella though as it meant walking past the mall Santa setup and giant Christmas Tree. 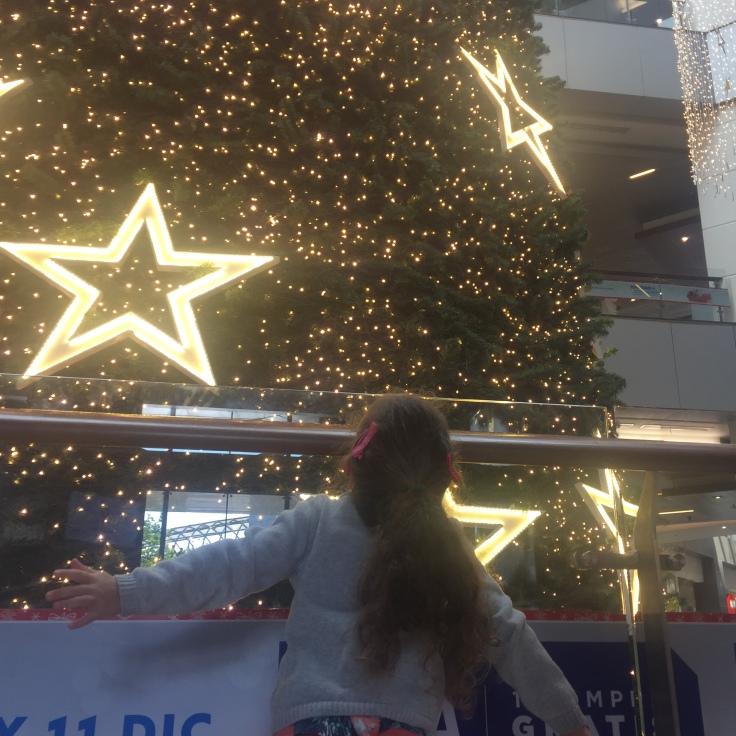 I will admit, I was tempted by the virtual reality ride on Santa’s sleigh. 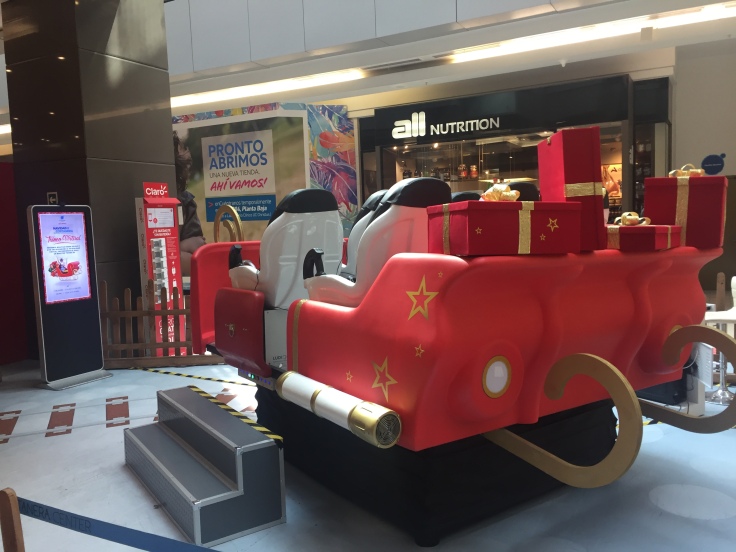 The rest of the bus ride featured the usual historical and political information. Interesting, but not the best HOHO bus.

One thing that did stand out is that Santiago has some great graffiti. 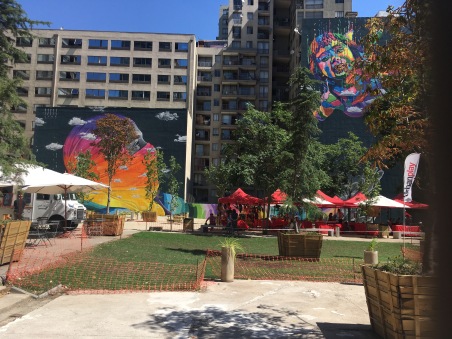 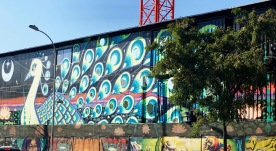 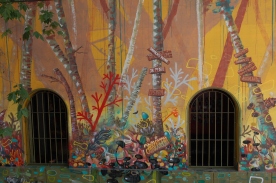 Santiago is also making good progress on bike lanes and other bike friendly measures. While some may be happy to ride on the freeway (below) those of us looking forward to our afternoon bike tour found the surprising number of separated bike lanes reassuring. 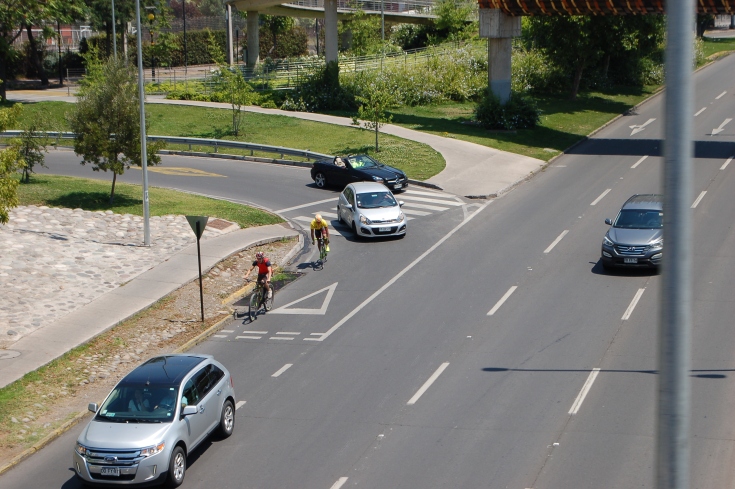 In the afternoon we had the first of three bike tours we booked with La Bicicleta Verde. In this case it was the “Parks and Politics” tour. As you can imagine, this featured a number of parks and some political history of the city along the way.

We chose to ride with La Bicicleta Verde, not just because they were featured in Rolling Stone magazine back in 2009, but also because they were very accommodating of our having Ella. While she and I normally like to role with a trailer, they had a handy bike seat available. 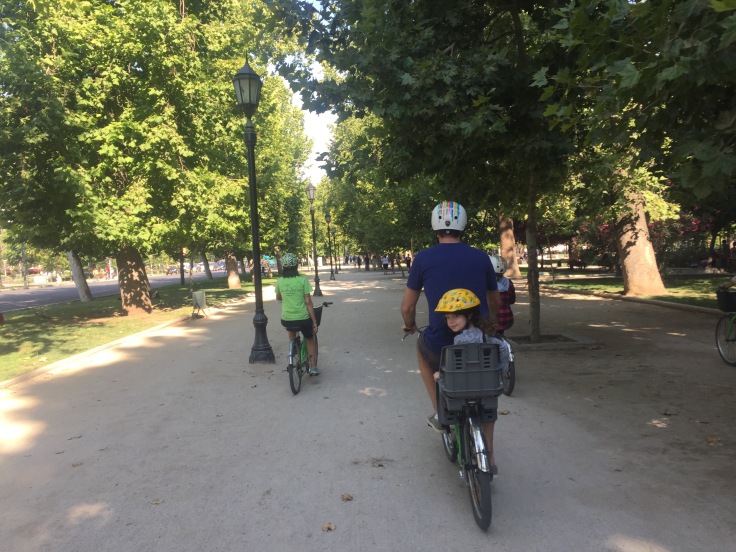 As a history nerd who likes riding bikes,  I really enjoyed the tour. It didn’t hurt that we had a great guide, Carla. Not only did she know her stuff, she also dealt well with the unexpected. The first example was having to reroute the tour on the fly because part of it was blocked by a Christmas parade being set up.

The second was during out stop at the Gabriel Mistral Cultural Centre, better known as the GAM. Originally built when Allende was in power, repurposed under the Pinochet Regime and then again following his departure, the building definitely has some interesting history.

Carla told us about one particularly interesting element, the door handles in this picture from a conference room in the basement. 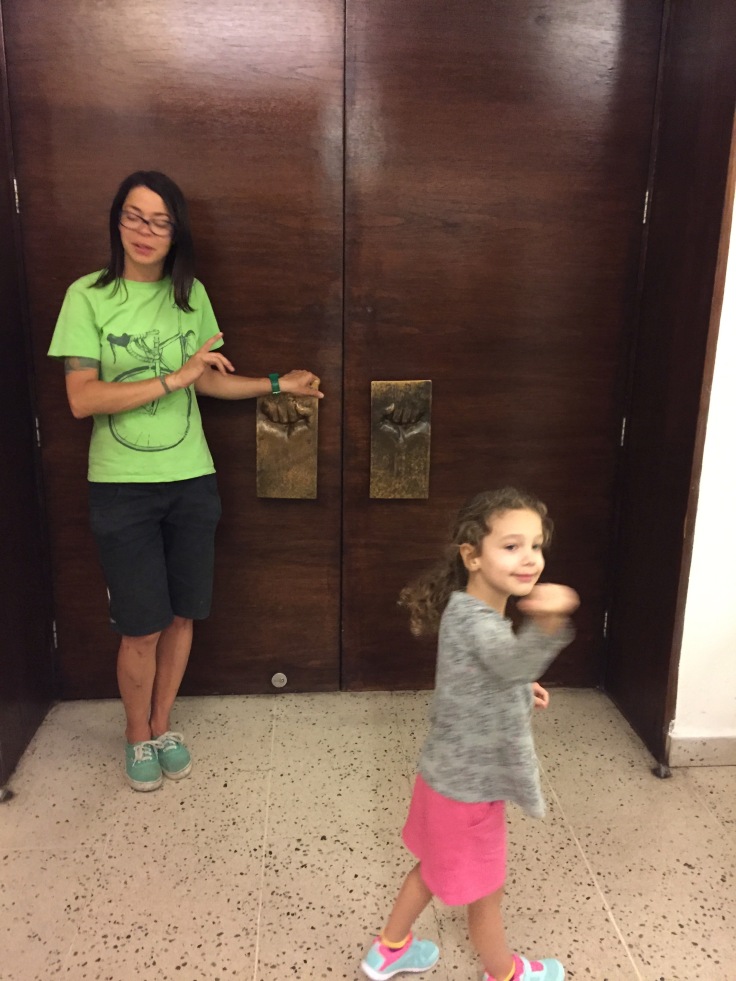 If you look closely you can see that they each have a fist etched in them. Today they point up, as a symbol of freedom or power, and this is how they were originally set up when they were on the main entrance of the building. Kind of like Ella is demonstrating to the group, though she’s got more of a ‘up yours’ stance than a ‘power to the people’ but she was trying. However, during the Pinochet regime they were placed down. Think of putting your arms out to be handcuffed.

There’s more to the story and I’ll try and find a link to put here. For our purposes today that’s enough background because where it got unexpectedly interesting was when a group of three older women joined the group to listen for a moment before one interrupted to comment.

The ensuing conversation took place in Spanish and I wasn’t able to keep up but Carla was kind enough to translate for everyone afterward. In short, this woman was a Pinochet supporter who wanted to mention that it was a shame that these handles were hidden (not that hidden) here in the basement rather than on the front entrance where they belonged. Apparently they were made by a famous artist and using them was the only good thing that Allende ever did.

A fascinating reminder that it’s been years since the end of the Pinochet Dictatorship, it doesn’t mean that everyone agrees now and that passions can rise quickly. For me it was also an interesting reminder that even Dictators who are known to have been responsible for thousands of deaths have supporters.

Talking politics can be exhausting, even if you’re not the one doing the peddling. 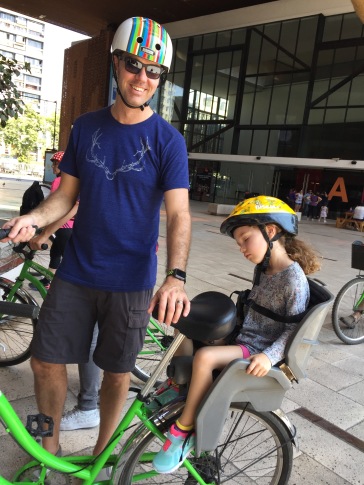 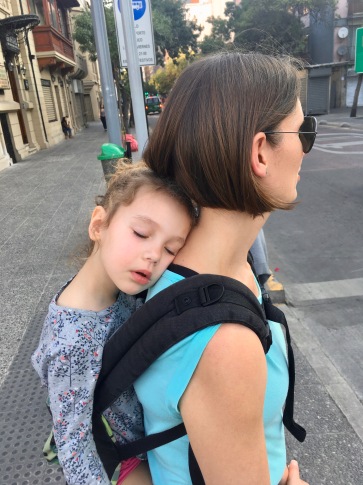 Up next, we ride the subway and hop back on the bikes, this time with wine!