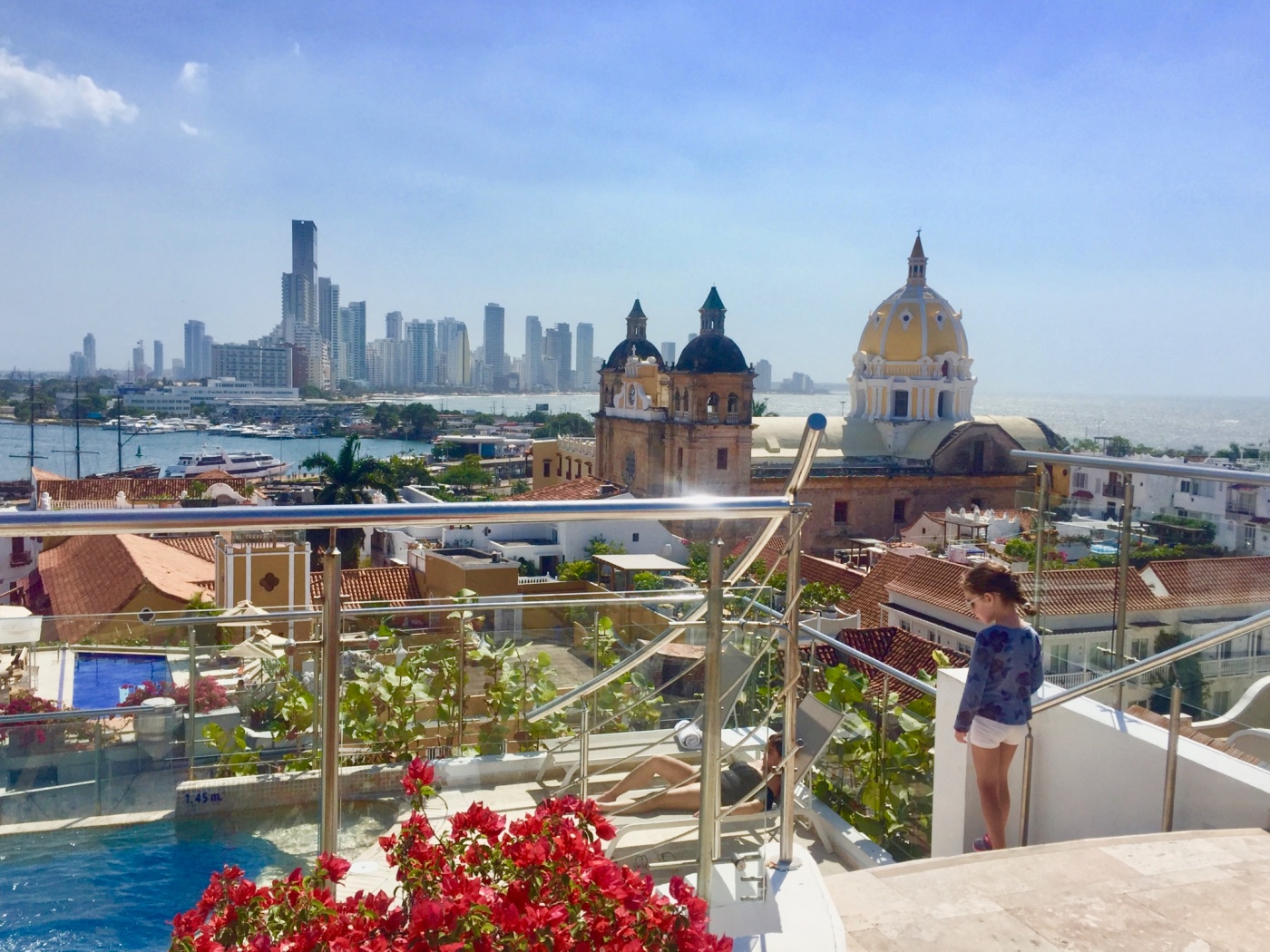 After a great day at Playa Blanca, we decided to spend some time wandering around the walled city.

Our primary mission was a stop at the market stalls at Plaza de las Boveda so Katy and Ella could do a little shopping. 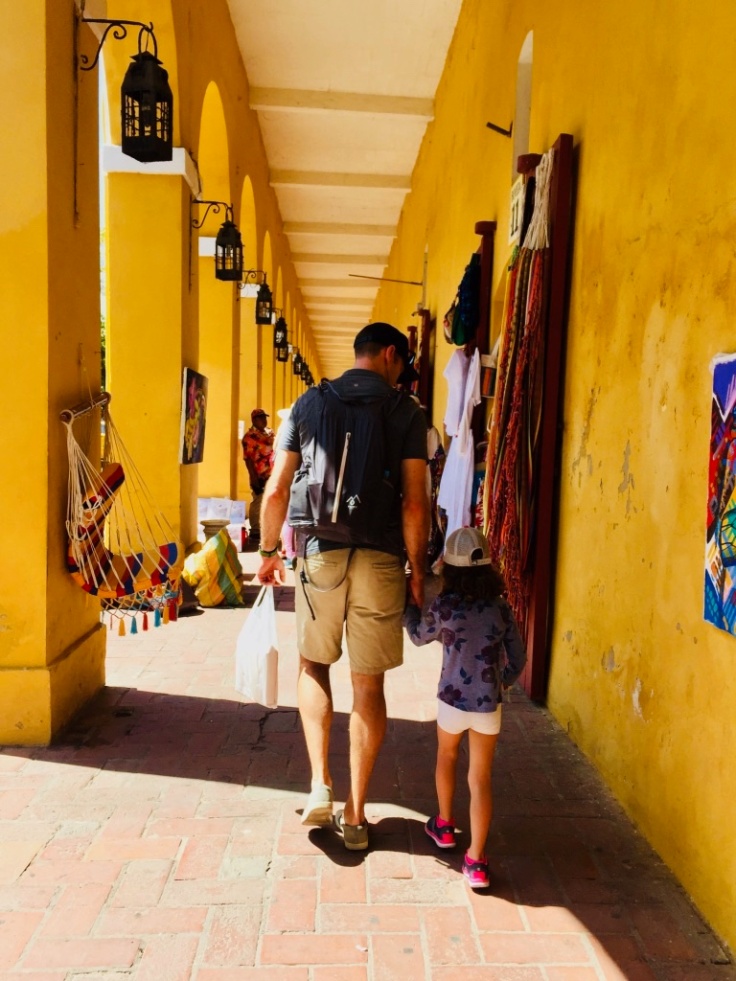 All that shopping can be hard work, especially in the heat. So, from Plaza de los Bovedas we made our way over to the Hotel Movich to see if we could get up on their rooftop patio for a drink or lunch. 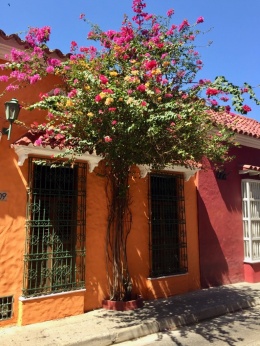 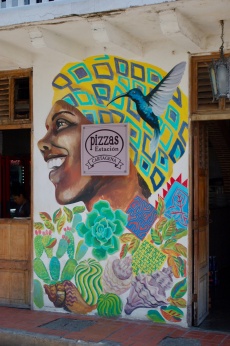 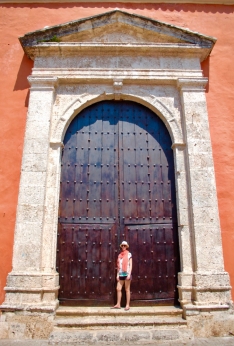 Not only did they let us up, we largely had the place to ourselves. It was a small little patio with big views. 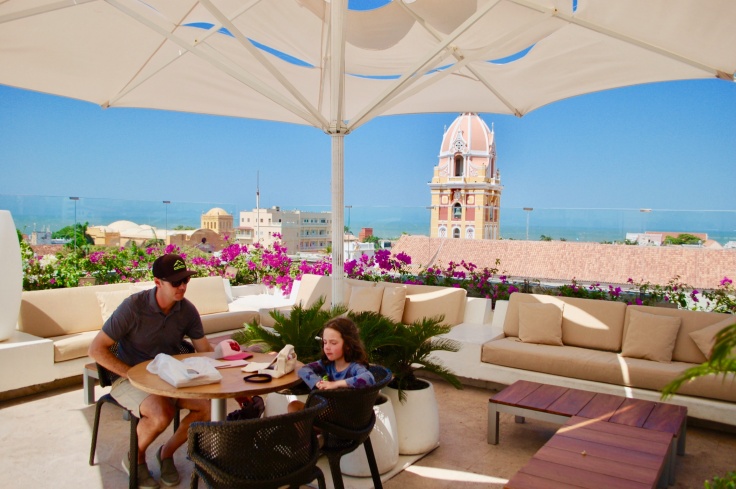 After lunch we made a stop by our hotel for a dip in the pool before heading back into the walled city for dinner at El Santisimo. Recommended by Gerardo from our bike tour, El Santisimo has a religiously themed menu with items like Pagan Rebellion, Temptation of the Bishop, The Altar Boy’s slip, and Habemus Carpaccio. 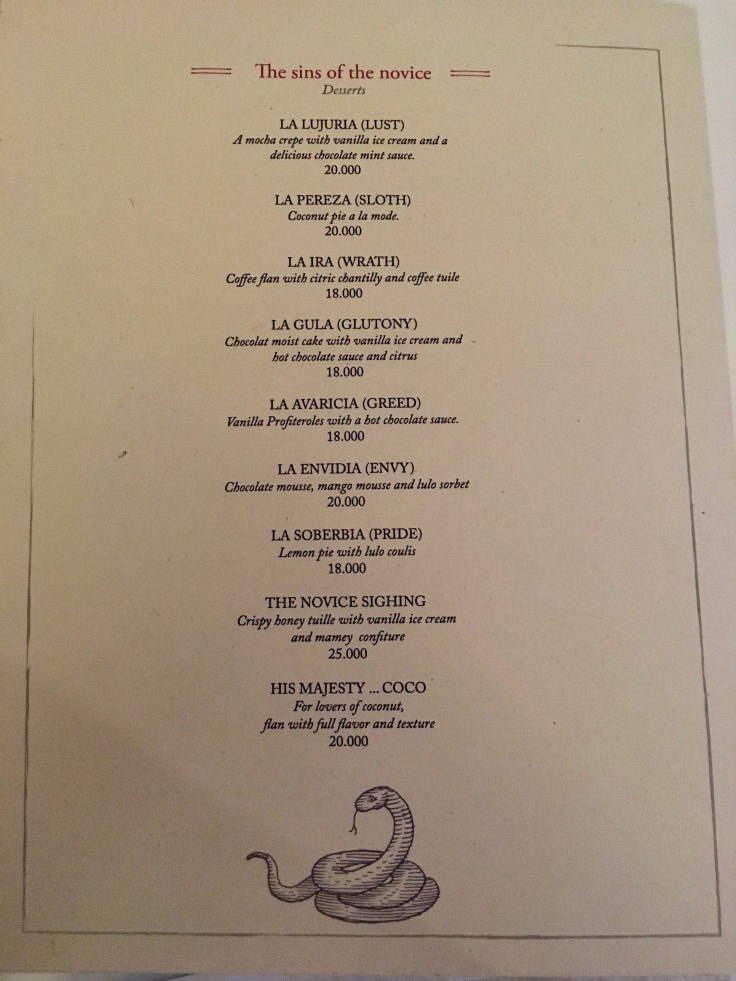 Back to the beach

The following day we made our way back to the beach. This time our destination was Isleta, a tiny island off Isla Grande in the Rosario Islands. With no bus option this time our day started with a taxi down to Muelle de las Bodeguitas. There we crammed on to a relatively small boat with 40 new friends for the hour long ride. Though not luxurious, it was nice to be out on the water. 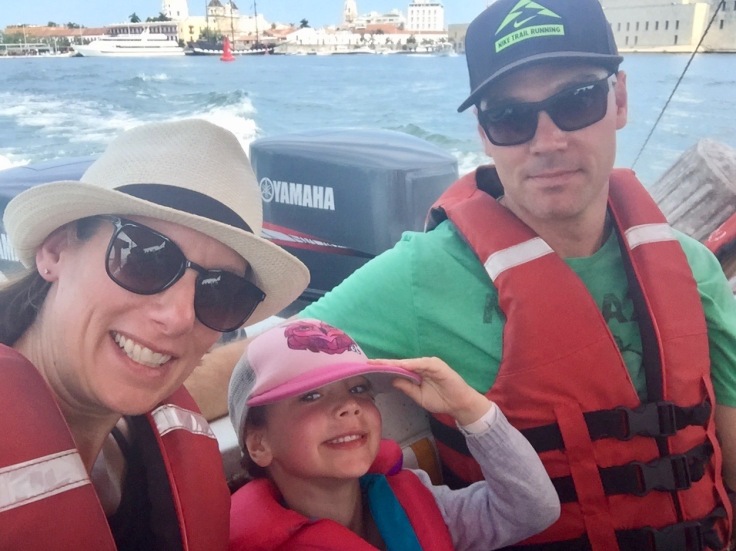 Our home for the day was a little resort called Isabela. Run by a Belgian couple in partnership with the local community, Isabela is a small ecolodge on a quiet little bay, perfect for swimming. The only caveat is a need for water shoes. The sand as you enter the water is full of sharp little chunks of coral, forcing anyone without them to do an awkward little dance.

We were greeted at our seats by a friendly and clearly tired dog. We never did get his name but Ella quickly made friends with him, at least temporarily, while we built a sand castle nearby. 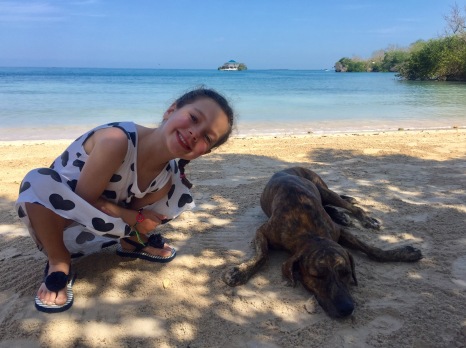 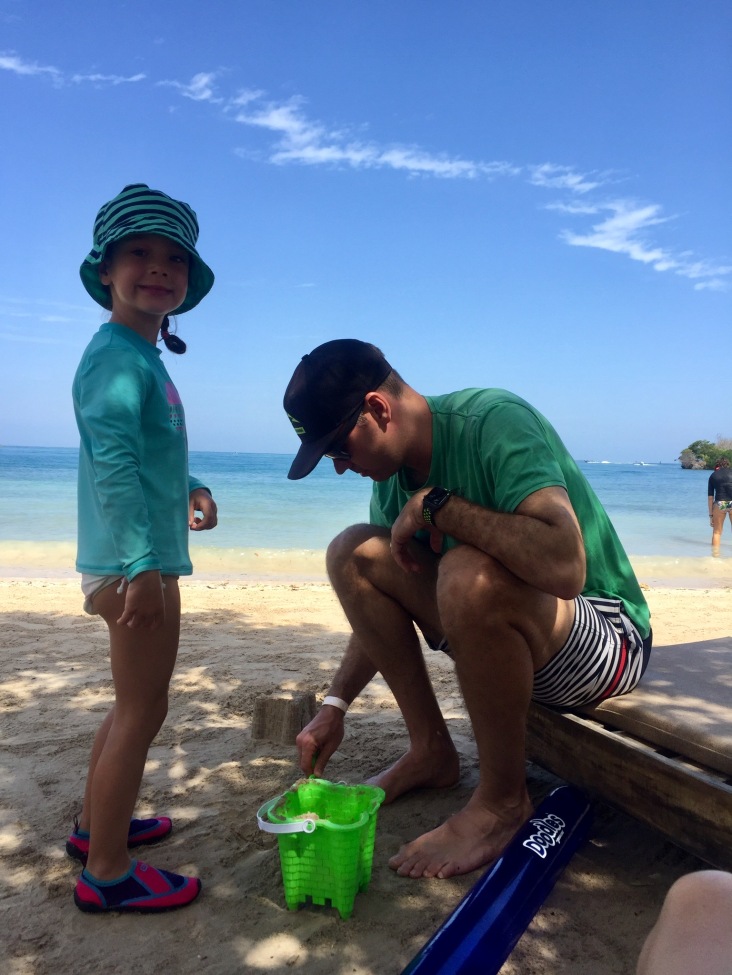 The main activities on the island were swimming and lounging, but they also had a couple of paddle boards for rent so we took advantage. 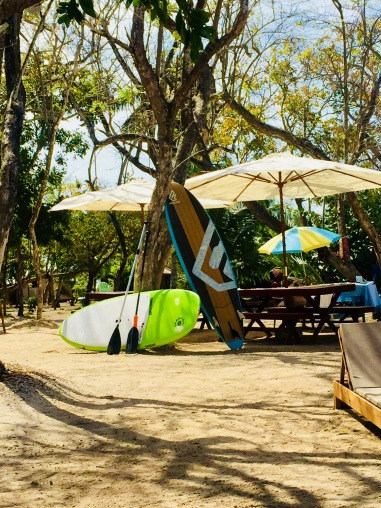 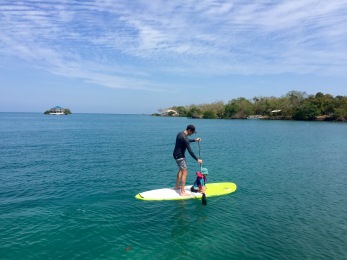 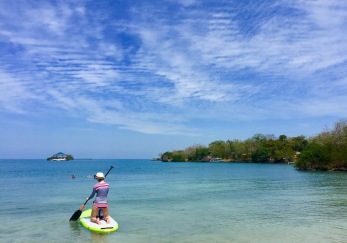 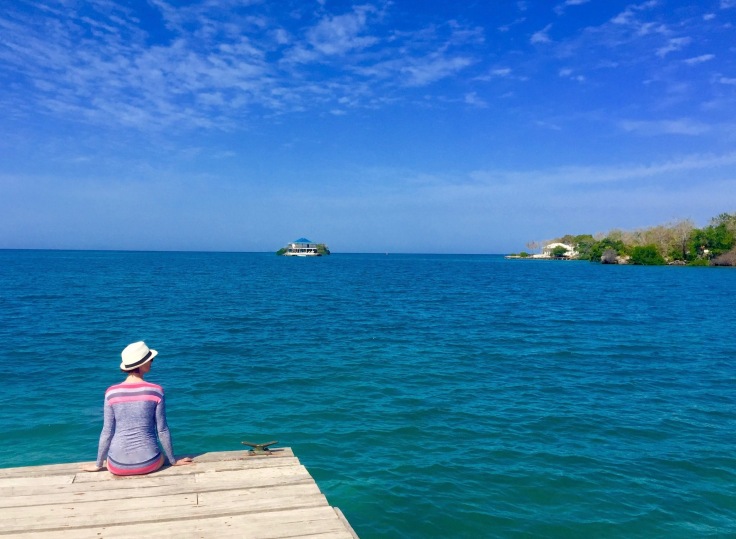 While Ella and Katy were out for their ride, I came back to our chairs to find our friendly dog laying in Ella’s castle. When I told him I didn’t think Ella would be pleased, he stretched and took another step in defiance before asking me not to rat him out. 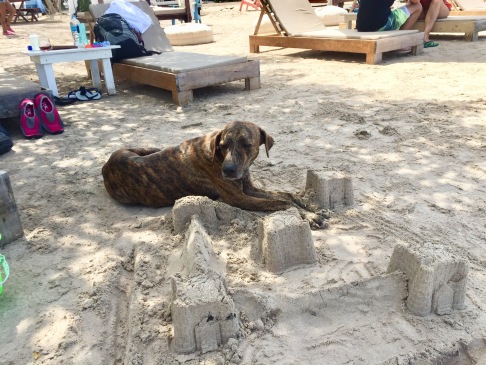 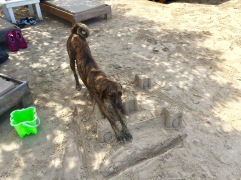 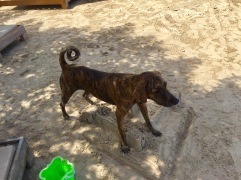 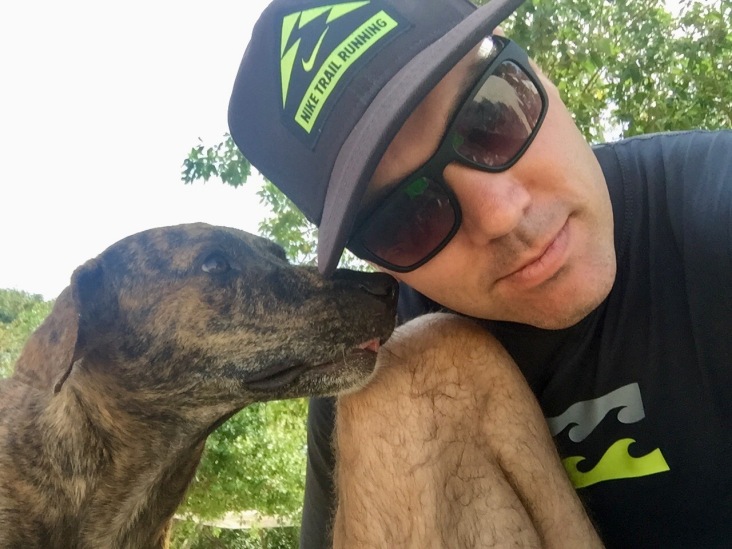 After a couple of hours eyeballing each other, Ella also made a two legged friend, another 5 year old from New York named Juliet. It was great to have a little kid for her to play with, both because she’s probably sick of us, and as we got to take a break and enjoy the lounging part of the day. 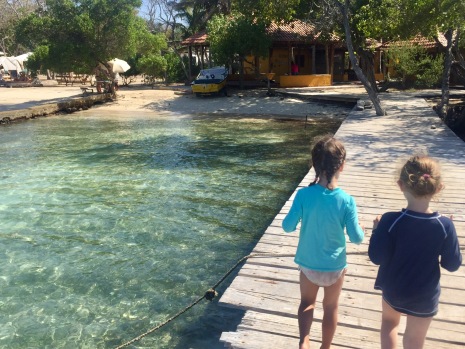 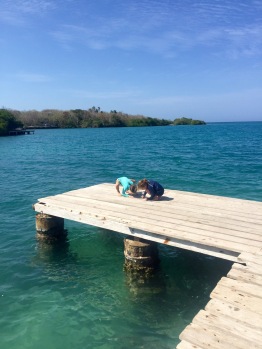 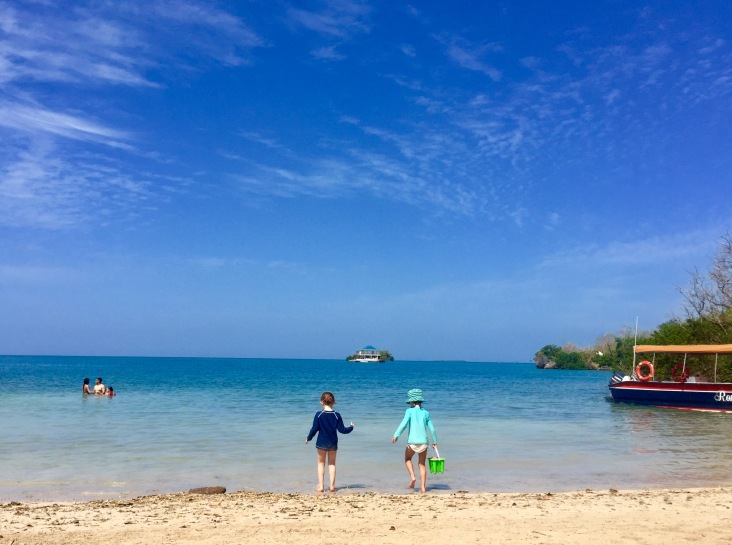 Unfortunately, the marine patrol had warned of rough waters in the late afternoon so we had to leave the beach a little early to make our way back to Cartagena. I can’t really complain though, the ride home was definitely rough. Always a little disconcerting when the waves are higher than the boat on either side. Interestingly Katy and Ella took very different approaches to the ride home. Where Katy alternated between clenching my leg and life jacket, Ella simply had a nap.

It was a bumpy (and wet) ride, but we made it back safely. After a nice dinner at Candé, complete with dancing entertainment, it was time to head back to the hotel. 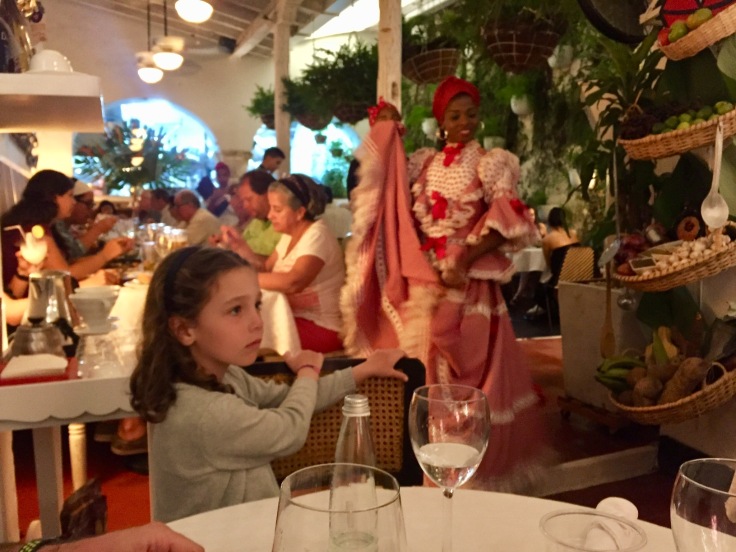