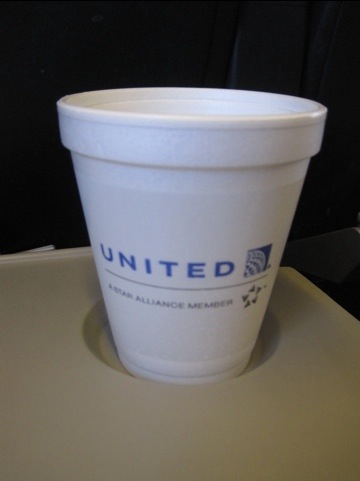 And we’re off. After scrambling through my least favourite part of travel, desperately trying to get things set at work before leaving, we’re on our way to Argentina. Unfortunately, this requires a bit of my second least favourite part of travel, flying. Don’t get me wrong, I love where affordable air travel allows us to go, but have to admit the novelty of being on a plane has largely worn off.

Apparently it used to be more exciting. I’m not old enough to remember it, but the new show PanAm provides quite a contrast by showing a time when air travel was glamourous. A time when you might get some champagne with your meal. A time when that meal might include prosciutto. I know, hard to belive, but both things that happened in the first episode. Oh flying, such an exciting way to travel.

Meanwhile, back here on our present day United/Continental airlines flight between Toronto and Houston things are a little different. Food? Sure. For a price you can have a boxed snack pack, assuming you have your “major US credit card”. (Not sure if my lowly Canadian Visa would cut it.) Champagne? Well, you can buy a shot of wine at $8 or so. Of course you can get a free coke product instead. Whoa, no, no, not the full can, that’s crazy talk.

Oh, if you ever wonder where all of the world’s styrofoam went? Apparently United bought it all before that whole environment thing caught on in the 90s and they’re still trying to use it up.

One other side bar, United has a strange price experiment underway. Where many airlines are now taking on the annoying habit of charging extra for oxymoronic “premium economy” seats, United has designated half the plane from Houston to Toronto “premium”. The result? The first half of the plane sits virtually empty while all of the people sit crammed in the back half of the plane. One brave soul actually asked to move into one of the empty seats. He was quickly scolded and sent to the back of the plane so he could wallow in the toilet stench while considering his impudence. I’d say the results of the experiment are mixed…at best.

After checking in at YYZ in Toronto, we were really worried about the second leg of our flight. Given that it is around 10 hours from Houston to Buenos Aires, we expected normal transcontinental service. You know, choice of movies, included drinks – they sure as hell aren’t free – and a hot meal or two. However, while we were checking in, Katy asked to double check that her vegetarian meal request had been received. The resonse? “I can check but I don’t think that we do special meals anymore.” What?! When pressed for further details about just what it was we would be getting, he said, “a light snack”. Seriously? On a ten hour flight?

It turned out that our fears were a bit unwarranted, the guy was just clueless. Much to our surprise, not only did we get warm dinners, Katy’s was actually good. Mine tasted like, well, airline food.

Though the plane could use a bit of an upgrade, namely a tv system from this millennium, we actually had a good flight down…we made our connections easily and I slept more than normal, despite the cramped conditions.

Happily in Buenos Aires, we’re off to explore what there is to see. More to come.

2 thoughts on “United/Continental merger shows no signs of improved quality.”