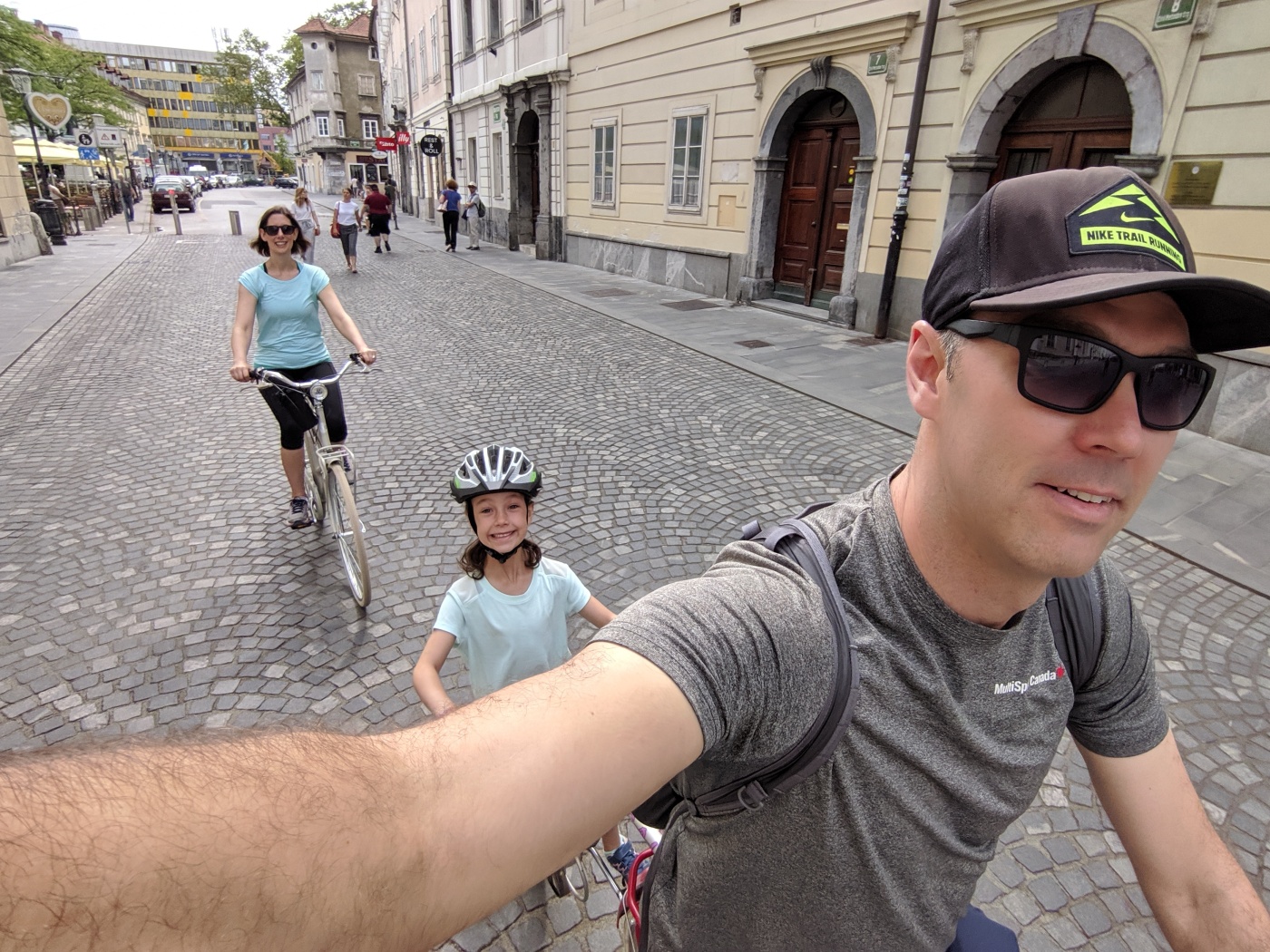 With a population of around three hundred thousand, Ljubljana is not a big city but it has one thing in common with Toronto, and big cities all over the world, a struggle balancing the needs/wants of those who drive and making the city a more livable and walkable place.

Where Toronto has made slow progress, Ljubljana, like other European cities, has taken the leap to make the centre of town car free with great results. While our guide Bostjan complained about the traffic driving into town, the vibrant city centre full of people walking and cycling, not to mention sitting on the many patios, is clearly a worthwhile trade-off.

For this, among other efforts to improve the environment, Ljubljana was named the European Green Capital in 2016.

One of the other nice, green aspects to the city is that potable water is readily available in public fountains all over. After travelling in many countries where we need to constantly buy plastic bottles to get safe drinking water, it was a nice change to simply fill up our reusable bottles from one of the many fountains or just a regular old tap.

Fittingly, and in keeping with our recent trips, we decided on a bike tour as the best way to have a look around the city. We found Ljubljana by Bike, a company that had a trail-a-bike available for Ella and provided great customer service leading up to our trip.

We met our guide, Tevz,  in a local park just as a ceremony with the Slovenian prime minister in attendance was coming to an end. The easy access to the Prime Minister highlighted the relatively small size of the country.

Our tour took us around the highlights of the old town, crossing over several of the many bridges that cross the Ljubljanica River, and a little further out to areas of the town that feel like a small village, despite their proximity to downtown.

One interesting thing we learned along the way was that the statues in town celebrated not soldiers but cultural contributors like poets and architects. As our guide explained, in a small country that has been routinely occupied by others, it was these people who kept the Slovenian culture alive.

After our bike tour, and following Tevz’s recommendation, we made a quick stop at “The” Skyscraper, so named because, well… it is. At the top of the building there is a little cafe that offers a great view of Castle Hill.

From there we headed back down to the river for lunch at a patio on the river, before taking the funicular up to visit the castle.

The castle offers great views of the city and area. It’s also home to a museum and has been well maintained/restored with elegant modern additions that don’t detract from the castle itself.

From the castle we made our way quickly back down to the river by foot for a boat tour along the Ljubljanica River. Within minutes we were transported downtown Ljubljana to what felt like cottage country.

After the boat tour, we were back at the hotel in time to watch a little of the parade back in Toronto celebrating the Raptors NBA Finals win before going to dinner. Leaving, I assumed we would miss the end of the parade while we ate. Of course, with the planned 2 hour parade taking more than 6 hours we were back in time to catch the end.

After a busy day, and some gelato of course, we were all pretty exhausted and ready for some sleep.