On our second day in Argentina we decided to leave the country and take the ferry across the river plate to Colonia in Uruguay. This was recommended both by the guide books and by a Uruguayan coworker of mine who said Colonia was nicer than Montevideo and definitely worth the trip.

Getting to Colonia from Buenos Aires is really easy. There are at least two high speed ferry companies that run, but Buquebus seems to be the more popular of the two. Tickets can be easily booked online and the terminal in BA is close to the city centre. The terminals in both BA and Colonia are only a few years old and checking-in feels more like an airport than a port. The ferries themselves are very comfortable and the trip is only about an hour.

The only problem we faced as we hopped in a taxi was that it was raining fairly steadily. While we did have rain gear this time, it didn’t look promising for wandering the streets of a quaint little town. As the ferry made its way toward Uruguay the weather didn’t get better. In fact, it only got worse. By the time we arrived at the port in Colonia, the rain was sheeting down at a 45 degree angle. You might be able to see it in the picture below. 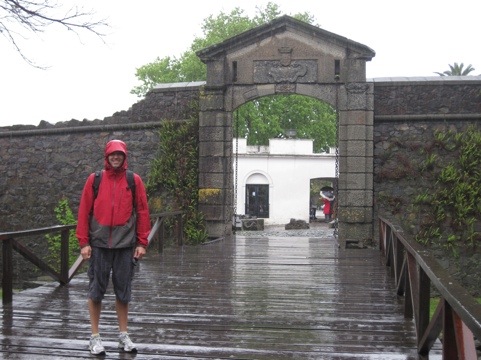 Interesting facts I learned on the ferry: 60% of tourists coming to Paraguay arrive by boat, much higher than the global average; 75% of the remainder come overland; Eric Clapton’s father was a Canadian. All brought to you by the Buquebus magazine.

The sideways rain made the novelty of renting a golf cart to cruise around town less appealing, though it didn’t stop everyone. 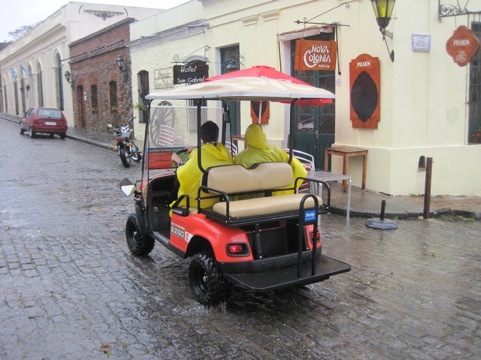 Not far from the port is a brand new tourist information centre. A really nice building, we were informed that in addition to providing information about Colonia, the centre was set up to tell visitors about some of the many other things there are to see in Uruguay. I’d say it worked, as I’m interested in seeing more of Uruguay, it will just have to wait for another trip.

From the information centre we decided to forgoe the hop-on hop-off bus and stick to our original plan to walk, despite the downpour.

The Old City of Colonia is beautiful and would only be more so without flooded streets. We passed through the City Gate and wandered down the Street of Sighs where we found a little artist’s shop (the shop was little, not the artist, we didn’t meet him). The shop was in an old house of Portuguese design that had been kept in original condition

After perusing the art and enjoying a brief respite from the rain we headed back into the breach once more my friends. We wandered the streets a little more before deciding the rain might be more interesting from the inside. Katy had read about a restaurant called El Drugstore so we decided to give that a try for lunch. Best decision we made in Colonia.

The food was great, the live classical guitar player was even better and the funky restaurant was just a pleasant place to spend some time. In fact, we considered just spending the rest of the afternoon there listening to music and drinking cheap, but good, red wine. In fact, maybe the wine is responsible for how much we enjoyed the mirror next to our table. 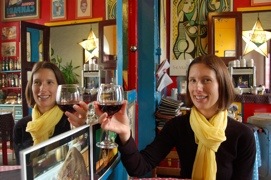 The rain had let up though so we decided to visit the Moorish-style bullring, Real de San Carlos. Rather than take a bus or taxi we decided to walk the 5 km along the water. It was a nice walk, but I suspect it would have been much nicer on a sunny day. As it was, we were the only ones out walking and got more than one odd look from passersby in cars. 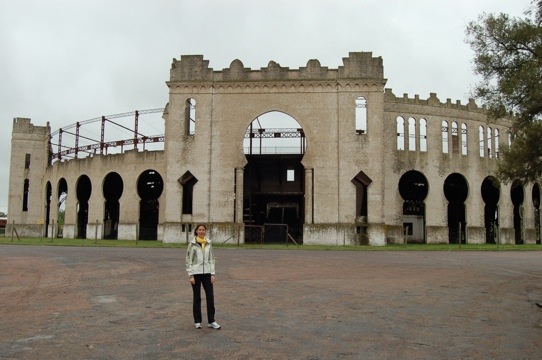 With the weather getting more threatening we managed to grab a cab back to the old city and made it to a cafe for a warm drink before the rain started up again. Before long it was time to make our way back to the Buquebus for the trip back to Buenos Aires.

Back in the city we had hoped we might be able to make it to the Argentina-Chile World Cup qualifying match at River Plate stadium. Unfortunately the timing with the ferry tickets didn’t work. The disappointment was softened by the thought of standing for a couple of hours out in the rainy conditions. Instead we found a local bar where we could watch the game on the big screen.

To be honest, I was surprised that the match didn’t seem to be a bigger deal in the city. Watching it in the bar was like watching a regular season hockey game, not a national team qualification match that meant something. Maybe the scoreline, a 4-1 victory for Argentina, suggests the locals had good reason to simply expect a victory.

2 thoughts on “Colonia – There’s more to Uruguay than rain.”