While we were touring the Brazillian side of the falls with Katy, Michelle, and Rebecca they mentioned a plan to have three meals in three diffrent countries all in the same day. Unfortunately they hadn’t been able to make it work. So, we decided that we would take care of it. The plan was to have breakfast at the hotel in Brazil and lunch in Argentina while visiting the falls from that side. The only tricky part would be getting over to Paraguay for dinner.

With breakfast in Brazil done we met up with Lilian in the lobby again. This time she came with a couple of Swedes that we would be touring the Argentinian side of the falls with. 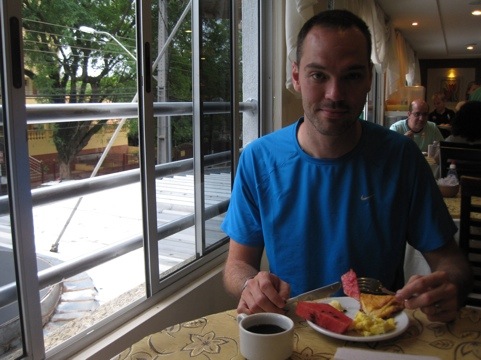 After crossing the border again – fortunately, the fact that with Katy’s passport approaching renewal, she’s totally out of space for stamps, didn’t cause a problem – we made our way into the park. Inside Lilian lead us through the hoardes of people and we hopped on the little train that takes you closer to the viewing point over Garganta do Diabo, “Devil’s Throat”, the largest part of the falls. Though it was a bit crowded, it was pretty cool to be able to walk out along the bridges right to the edge of the falls.

We then walked along the path past some of the smaller falls before stopping to have lunch. Two meals, two countries – so far, so good.

Where you can take a helicopter and rappel on the Brazilian side, on the Argentinian side you can ride a boat right up to and under some of the falls. If you ever have the opportunity, we would definitely recommend the boat ride. This is no Maid of the Mist crawl either. Instead you start down river and ride a speed boat (kind of a zodiac on steroids) up some rapids to the falls. Needless to say, you get a little wet along the way. We thought we were fairly prepared with our Gortex jackets, but really the only thing that mattered was having a change of clothes afterward.

After getting into our dry clothes we were ready to head back across the border once again. Fortunately they managed to squeeze more stamps in and let Katy though our second last border crossing of the trip, and probably the last stamps, without any hassle. Here, the natural border between Brazil and Argentina is the middle of the river, so we stopped on the bridge to mark the occasion (I’m the one in Brazil).

Back in Argentina, it was time to head over to Paraguay for dinner. Again we were lucky to have Lilian. When we first asked about crossing over to Paraguay she tried to dissuade us. She said that Ciudad del Este, the Paraguayan town on the other side of the border, is primarily a place for Brazillians to hop across for cheaper Paraguayan prices on everything from tires to electronics. (Readers from Toronto, think Buffalo). Not exactly a must-see (see, Buffalo). We had heard the same from Matt, a friend who works for G Adventures in Lima, Peru when we were planning our trip.

However, when we explained why we wanted to go, both to have three meals in three countries in a single day and because we need to eat a meal somewhere to consider it a country visted, she arranged a driver to take us over and show us around.

With Ciudad del Este not somewhere you want to be after dark, even with a driver, we made a quick turn-around at the hotel after the falls and headed straight to the border. The Paraguayan border is what you might call porous. Though Canadians apparently “need” visas, only about 1 in 1,000 cars gets stopped and when that happens it’s more a question of bribes than official visas.

At first our driver was pretty quiet, but as we drove we got to talking and he offered a lot of insight into Ciudad del Este, Brazil, and the relationship between Brazil and Paraguay. It was only once we were in Paraguay eating dinner that Eduardo mentioned that he was actually Lilian’s husband.

In the end, Lilian and Matt were right. Paraguay wasn’t much to see, but we really enjoyed our drive in with Eduardo. It really highlighted for me how Brazil’s economy taking off is impacting their neighbours. It was interesting to see how things changed immediately after crossing the border. The streets were dirtier, the cars more banged up, and the traffic more disorganized. As an aside, I’m convinced there is a direct correlation between GDP and the orderliness of traffic. 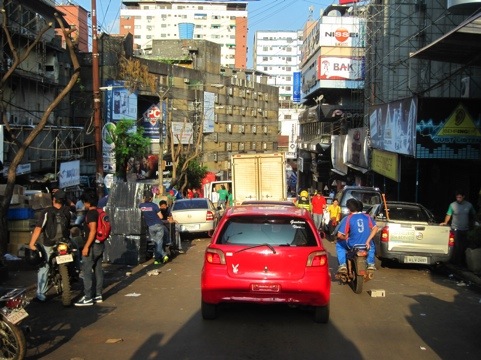 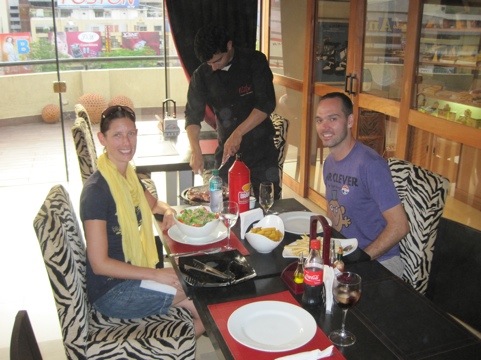 The odd part about visiting Ciudad del Este is going into one of the many malls. Where the streets look like those of a developing country, you could easily mistake the malls for a slightly rundown one in North America. Apparently only Brazillians shop in them, as most Paraguayans can’t afford to.

Back in Brazil, we headed off to get some sleep before a 4:00 am drive to the airport. Poor Eduardo was taking a group out to see a show that night before meeting us at 4:00 am to give us a lift. Needless to say, we really appreciated his long days and would highly recommend Luar Tourism (obviously there is a reason G Adventures uses them). Both Lilian and Eduardo were great.