Waking up in Nizwa, there was little need for a weather forecast. It was going to be hot, sunny and humid. After some breakfast at the hotel, we headed over to the Nizwa fortress. Like the others we had visited or seen at Jabrin and Bahla, it had the familiar smooth lines and has been kept in great condition.

Nizwa’s fort was built over the course of 12 years in the 17th century and is famous for its round, 40m tower which offers a view of the surrounding area, including the mountains. The fort itself was interesting, but the highlight for us was probably the groups of school children on class trips. Both the boys and girls groups were intrigued by us and were quick to say hello. We didn’t want to disrupt them too much and risk the wrath of their teachers, but we couldn’t resist one quick picture as they went by.

After the fort, we had a couple of hours to explore the souk next door before we started our drive into the mountains. Midday Wednesay is not a busy time in the souk, which is understandable in the heat. While there wasn’t much going on in the fish, meat, date or other more locally oriented markets, the tourist shops were open, giving Katy a chance to get her shop on.

Actually, this was more of a scouting trip to for the real deal when we reach Muscat. The exchange rate between the Omani Rial (OMR) and Candian dollar is about 3:1. We were a bit surprised by how expensive things are here in Oman. While you can negotiate a bit on the prices of many things, don’t expect a big bargain.

A quick trip back in time

From Nizwa, we hopped in the van and headed over to Al-Hamra, a small village of around 8,200 in the foothills of the Hajar Mountains. One of the oldest villages in Oman, Al-Hamra has many well-preserved mudbrick houses built in the Yemeni style. In one large house, a museum highlighting traditional Omani life has been established in partnership with the government.

The tour featured a number of demonstrations including how oil, used both topically and medicinally, is extracted from moringa seeds (moringa is also known as horseradish tree); how grains were milled to make bread; and how saffron was mixed for use by women on their faces as a means of keeping cool. All of these activities involved rhythmic work that was accompanied by song, but you’ll have to wait until we get home and can post a video to see and hear what we mean. 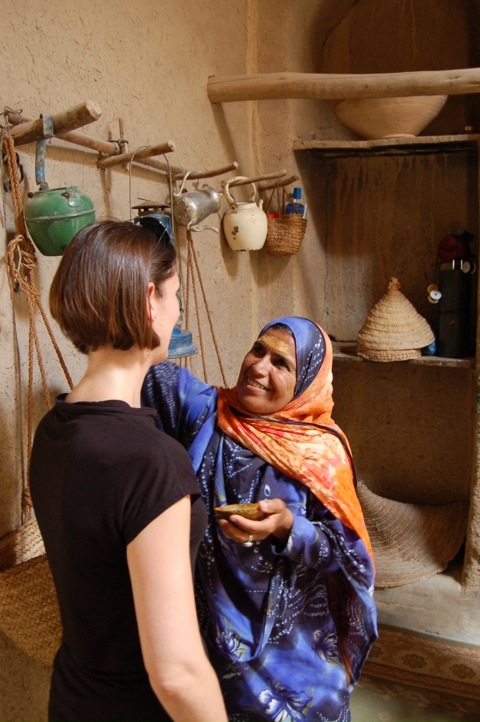 Before leaving we were invited to have tea and coffee. Typical of this part of the world, the tea had too much sugar for my taste, but the coffee was very nice. While we were having our drinks, an old local woman walked in and said hello to one of the guys showing us the house. In return he made a couple of joking remarks that earned him a good natured, but hard, swat or two. Luckily for him, she stopped short of pulling off a shoe. It seem like and odd thing to comment on, but from typically reserved, though very warm and friendly people, it was a nice reminder that we’re all the same. No matter where in the world you are, if you tease a strong, sassy woman, you better be ready when she comes right back at you.

What is this wonderful stuff falling from the sky!

From Al-Hamra we headed up into the mountains towards Jebel Shems. At 3075m, Jebel Shems (mountain of the sun) is Oman’s highest mountain. As we rolled through the hills a curious thing happened, the sky started to turn grey. By the time we reached our destination, the Jebel Shems Heights Guesthouse, the sky opened up with torrential rain.

Though it fell hard, the rain didn’t last long and it was more than welcome. Not only did it bring a brief break in the temperature, accentuated by the altitude, it also turned on the tap to the creeks and waterfalls in the area.

We dropped our bags in our room and decided to go out for a quick hike before dinner. As we came out the door, we were greeted by a somewhat forlorn looking donkey, Who we’ve since named Herman; donkey in Arabic is hemar. We were going to just call him hemar, but that’s an insult in Arabic, so Herman seemed more appropriate.

Despite a heart to heart with Herman, I don’t think he’d be willing so share a litter with Watson. Besides, we don’t have a big enough lawn at home. So, as cute as he is, Herman will have to stay here when we move on to Muscat.

One thought on “Can you train a donkey to use the litter?”