It’s kind of sad that Steve and the gang (a.k.a Canada’s current governing party) can cause us trouble, even on the other side of the globe, but that’s just what happened.

For the GAdventures group that we had arrived in Muscat with, the final destination on the trip was a return to Dubai. However, thanks a political tiff between Canada and the UAE government, part of Steve’s efforts to make us a less well-liked country, we couldn’t return to Dubai with the group.

Fortunately, they Oman hadn’t been offended yet and we were able to stay with the group for a quick tour of Muscat, including a visit to the palace grounds, even if they didn’t actually let us in the door. 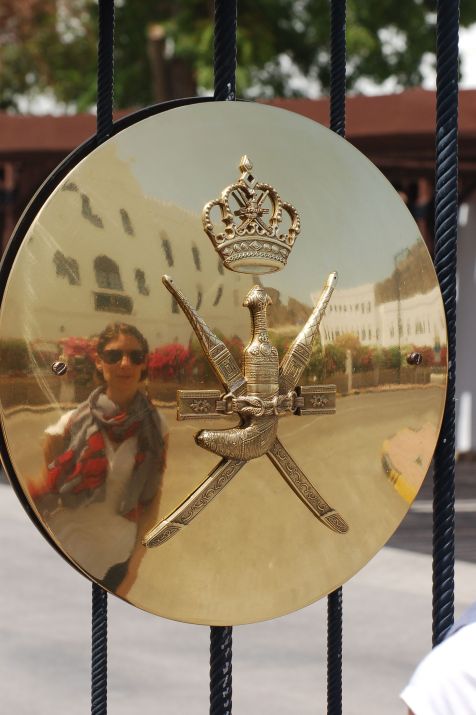 As it was Friday, the mosque wasn’t open for visitors but we did get a closer look from the outside.

Just because it’s a fancy hotel, it doesn’t mean they aren’t nice

In keeping with our habit of finishing and/or starting our trips with a nicer hotel, we decided to spend our last few days in Muscat at the Shangri-La. As the hotel is farther away from the centre of the city, we were really happy when Sultan insisted on dropping us off before heading back to Dubai. We were also grateful to the rest of the group for taking the 20 minute detour.

The Shangri-La in Muscat is actually three hotels nestled side-by-side along the coast. So, going there is a little like being Goldilocks, you need to find the one that is, ” just right”. The first hotel is really a family resort. The second, is what I would call (and it sounds strange to type this) typical Shangri-La. The third is a 6 star, take-the-Environment-Minister-for-dinner kind of place. (The Omani Environment Minister was eating there when we went over for dinner one night.)

We were booked in the family resort. Why? Well, because it was cheaper. Since we didn’t have any kids, we decided to see if the fact that it was our anniversary would be enough to get us an upgrade to the “typical” Shangri-La. The response? “Well, I could do that, but it would mean that you would be in the other hotel, in a room without a view. However, I think I can put you in a nicer room in this hotel.” Well, that she did.

The room itself was nice, but it’s a nice hotel so that’s not a big surprise. However, the room also came with a massive balcony and a view of the ocean on two sides. Needless to say, we were very grateful.

If it’s hot enough, decorum goes out the window

After checking in and taking an initial tour of the mini-lazy river, it was time for dinner. I may have mentioned in a previous post that it was a little warm, but I can’t say it too much, it was hot. However, being Canadians, when there’s a chance to eat a meal outside, you take it. So, when the waiter asked if we wanted to sit inside (with everyone else) or outside on the deck, we said outside.

You know how when you’re on a nice airline, or maybe at a higher-end restaurant, someone will come around to your table before dinner and offer you a nice warm towel so you can “freshen up” before eating? Well, that’s exactly what happened here, only the towels were soaked in ice water. This might seem strange, but it was a brilliant idea. So good in fact, when some others did join us outside, it wasn’t uncommon to see a very proper looking man wearing his ice towel on his head. Sadly, we weren’t able to get a picture of that.

We did, however, get a picture of the champagne and cake that greeted us in our room after dinner. Apparently the receptionist took it upon herself to do more than just give us a nicer room. 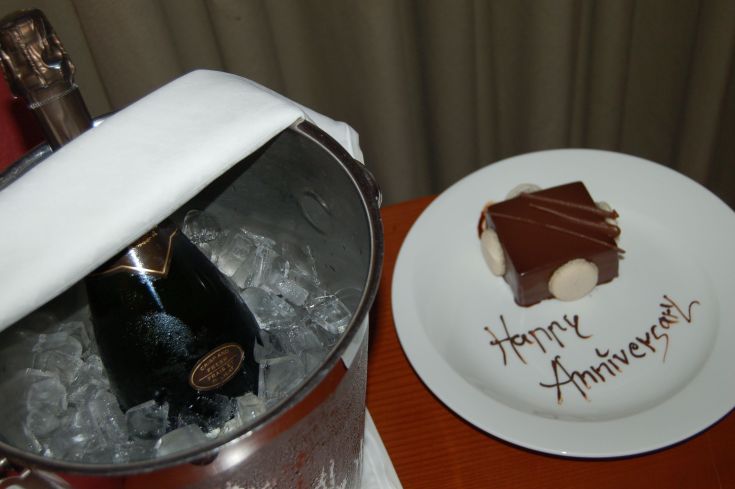 Because ‘rotationally advanced’ dolphins is a dumb name

The waters off the coast of Oman offer three great animal experiences: humpback and blue whale watching, dolphin watching, and hatching sea turtles. Sadly, we weren’t in season to catch the whales, but we did get a chance to take advantage of the other two.

Our first morning we decided to go out with one of the dolphin watching tours. The dolphins that we went out to see are called spinner dolphins. They get this name from the way they dance at Phish concerts. Anyone? Anyone? No? Alright moving along. They are so named because they spin around when they jump out of the water. See, isn’t that a less exciting name.

For a while it looked like we wouldn’t see them as we bobbed in the Gulf of Oman. Eventually they did show up, but their habit of showing up unexpectedly made it difficult to get a picture of them actually spinning.

Ever wonder why turtles lay so many eggs?

Other than spending time sitting around doing nothing, the one thing that Katy really hoped to do while we were near Muscat was see sea turtles hatching.

We thought this would mean an overnight trip back to Sur, where sightings were guaranteed at this time of year. However, proving that they really can take care of any request, when we checked in to the Shangri-La we saw that they had a sign for turtle hatching alerts. It turns out that there are a few sea turtle nesting locations on the grounds of the hotel. While they wouldn’t guarantee it, we were there at the right time and if we wanted they would take our names and give us a ‘turtle call’ if there was an opportunity to see it happen.

We told them to call us anytime, day or night, and we would be there. Expecting a call at some ungodly hour we waited and waited, but never heard anything. Then, on our last night, while Katy was having a shower before dinner, the phone rang. I picked up and at first couldn’t make out what the woman on the other end was saying. Eventually I put it together that there were some turtles hatching and we should hurry down to the beach if we wanted to see it.

I said thank you, hung up the phone and ran towards the bathroom yelling, “turtle alert! turtle alert!” Katy, always ready to jump at an exciting experience, came running out of the shower before realizing that she still had a head full of shampoo. After a quick rinse we raced to the beach.

Given that these turtles hatch on a fairly well populated beach, they get a little assist from some staff. Rather than just hatching and making their own way to the water, they are put in a bin and moved to a quieter section of the beach… followed by a hoard of people. Apparently we weren’t the only ones who received the turtle alert.

We all sat in surprising quiet as the turtles were released from the bin and made their mad dash for the water. People were smiling, others were in tears, it was a great experience. Well, for the most part.

After a few of the cute little turtles had made their way out in to the water, someone said, “wait, did that fish just eat a turtle?!” Sure enough, some smart fish recognized a buffet when they saw one and were picking off the turtles as they came by. We can only hope that a few made it to safety. 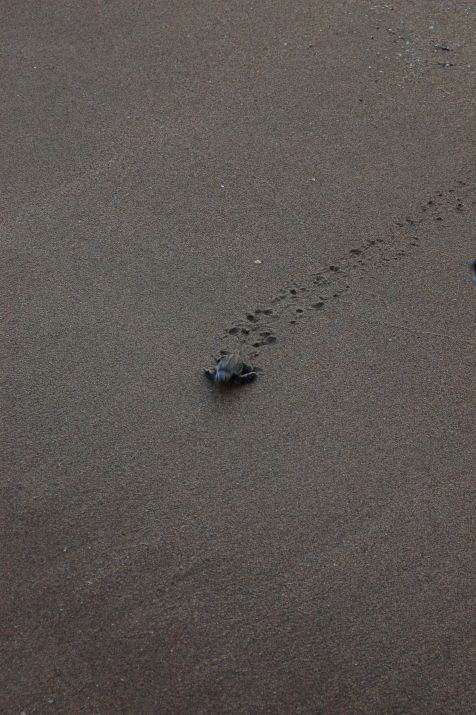 Travel really does change your life

With Oman and UAE we’ve been to 39 and 40 countries respectively. Along the way I think it’s fair to say that we’ve had some pretty great experiences, a few of which have changed our lives forever. With the UAE and Oman it’s, as we were told in Thailand, “same, same, different”. Yes, we had great experiences and yes, they’ve probably changed our lives. But our lives also changed in one extra way… soon, we’ll a new companion to join us on our travels.

5 thoughts on “Chasing dolphins and turtles in Oman”