Our second full day in Cape Town started with a trip to the Neighbourgoods Market in the Woodstock area of the city. If you’re from Toronto like us, you’ll know what I mean when I say it’s similar to the Distillery District. It’s an old factory, in this case the Old Biscuit Mill that has be revitalized as a market full of local artists and specialty goods sellers.

There are a few differences from Toronto’s Distillery District. The most striking for me were the parking guys who seem to risk life and limb racing down the street in front of you offering to park your car for a small fee. This seems particularly strange when Kevin drove all of half a block extra and parked for free. He explained that Cape Town is so car centric that people will drive rather than walk 200 meters, so getting the closest possible parking spot is a competitive sport.

Meanwhile, Ella and I pondered the meaning of life in a pool of stagnant water.

Oh and if that t-shirt looks familiar. Yep, same one as all the other pictures. Still no luggage at this point. I think this is around hour 60 in that same shirt.

The other big difference, and this one very positive, was the food market. While the Distillery might offer a number of perfectly good restaurants, here there were lots of stalls with food from all over the world at great prices. Even better, you could get a beer for 30 rand (around $3) to go with it.

It was incredibly busy, but we managed to get some seats at one of the communal tables. Even better, none of our party was injured when the bench you see Kevin sitting on, collapsed not long after this picture was taken. Oh, by bench I mean board on top of some plastic crates. 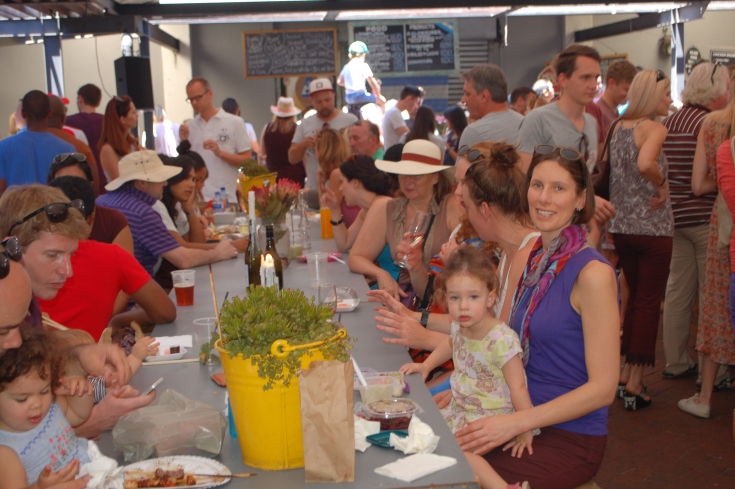 ” ‘Rumbullion’ is an archaic English term for a riotous good time, and that is exactly the atmosphere that is recreated in this incredible outdoor setting, albeit with a more relaxed feel.”

In the evening, Kevin and Vanessa had made reservations for us all to have dinner at The Roundhouse. Located just below Table Mountain with a great view of Camps Bay, the location’s history apparently dates back to 1786 when a guardhouse was set up by the Dutch East India Company. We ate outside on the grass terraces known as the Rumbullion.

With weather that couldn’t have been better, it provided a great venue for a dinner that, were it not for the toddlers, probably would have included a beautiful sunset.

The munchkins didn’t prevent the part of the venue we were in, Rumbullion, living up to its name. Somebody was having a 24th birthday party a few tables over which made us feel a little old, but not at all in a bad way. Between umpteen versions of “Happy Birthday”, a little stumbling, some tears and one girl crawling up on the ground to meet Nate, it seemed quite clear they were enjoying themselves.

Though they provided a fair amount of entertainment, they were also really rude to the restaurant staff. You couldn’t help but wonder if they were just rude people, spoiled kids, drunks, or, given the respective and non-overlapping races, racist. In the end, we’ll never know but that certainly wasn’t a nice part of the evening. It did mean that we were all extra nice which in no way made up for it.

Among those who don’t have to worry about such things, Ella explained to Nate that he should really try cheerios and that the first one was free. 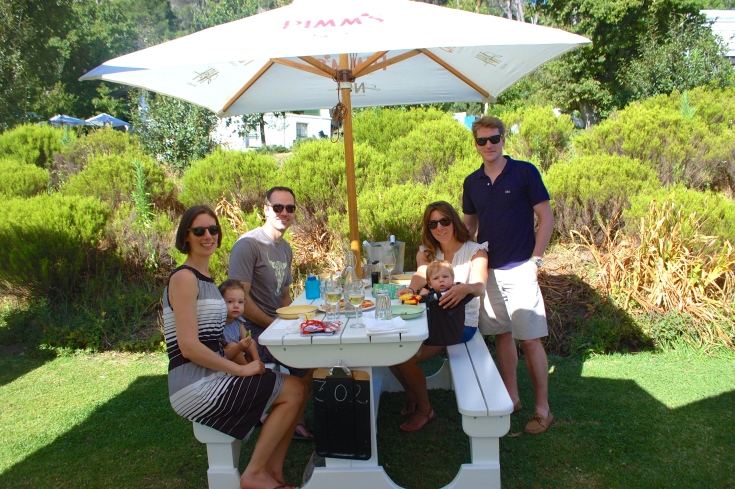 Another great day in Cape Town exploring two places we would never have found on our own. Fortunately, we aren’t done with Kevin and Vanessa yet. We’ll see what they have in store for us tomorrow.

3 thoughts on “If nothing else, this will teach you the meaning of Rumbullion”