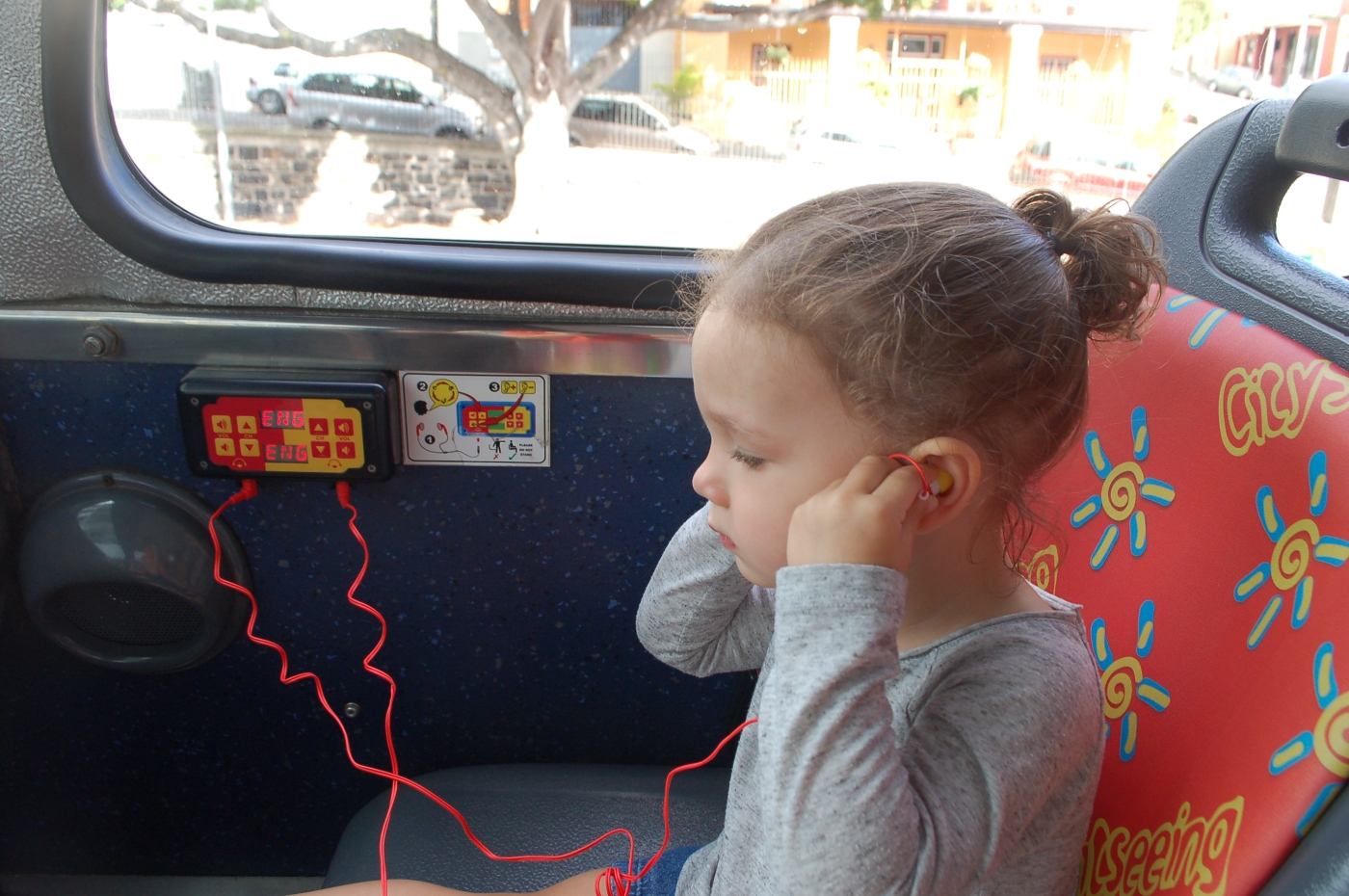 Without our personal guides in Cape Town to show us all the ins and outs from a local perspective, we decided to hit up the town in true tourist style. If you’ve read posts like this one, or this one, or even this one from previous trips, you know that this sometimes means a City Sightseeing hop-on hop-off bus. 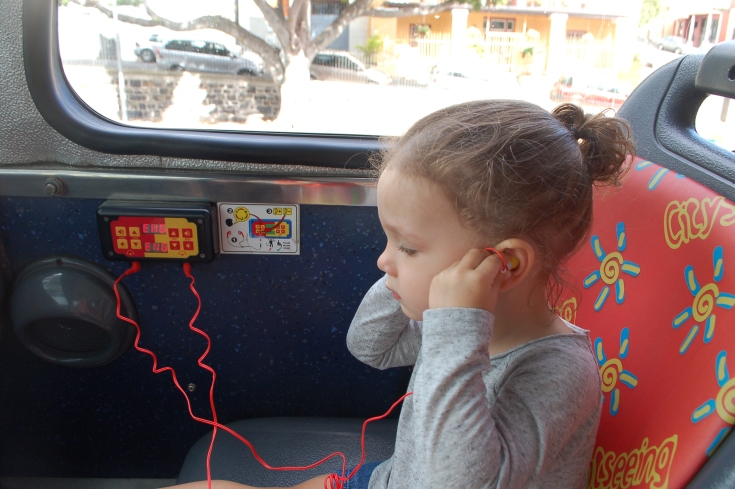 There are probably few things more touristy than sitting on a giant coach with headphones in your ears, but you can learn a few things. Above you see Ella learning that the phrase “women and children first” was originally coined in a shipwreck off the coast of Cape Town. See, bet you didn’t know that.

Though we’re fans of the hop-on hop-off bus as a way to get a lay of the land in a new city, in this case we chose it for two reasons. First, we had free passes from our helicopter ride that were going to expire if we didn’t use them. Second, it was an easy way to get up to Table Mountain.

Four down, three to go

There are two ways to visit the top of Table Mountain. You can hike, which takes about two hours, or you can hop on the cable car and ride up in about 3 minutes. The hike looks great. If Ella wasn’t with us, or she was a little older, that would be our preferred option. As it is, we decided to go for the cable car.

While waiting in line, we were reminded that Table Mountain was fairly recently named to the new 7 Wonders of Nature list. This means that, having already visited the Amazon, Iguazu Falls and Ha Long Bay, we’ve only got three to go. Looks like our next trip might need to be to Asia. 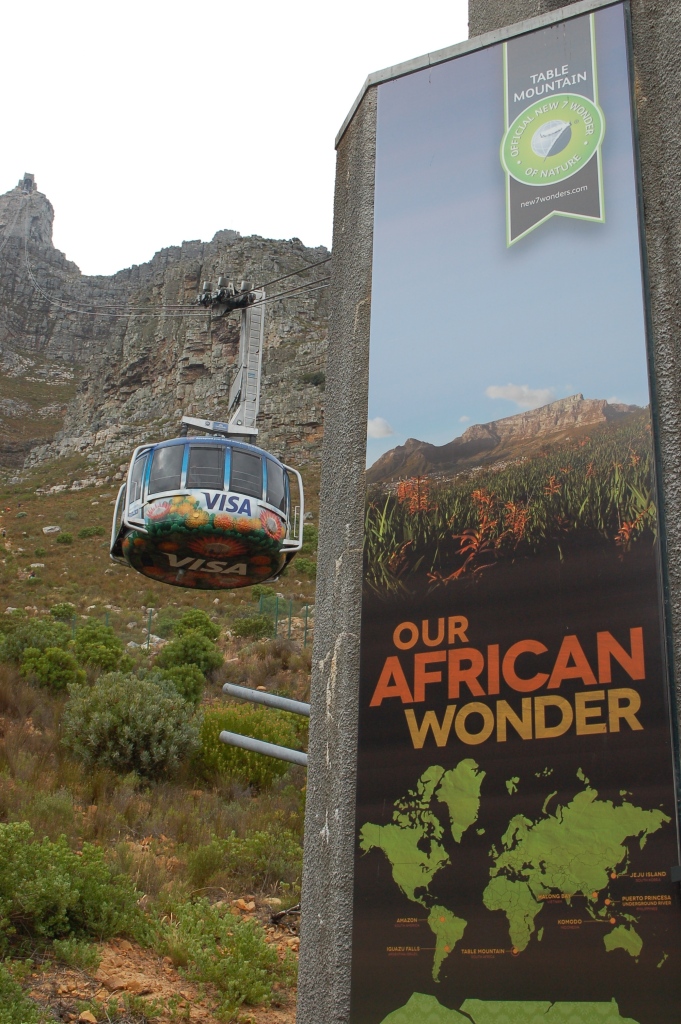 As you might guess, Table Mountain offers a great view from several directions and a nice perspective on the city. 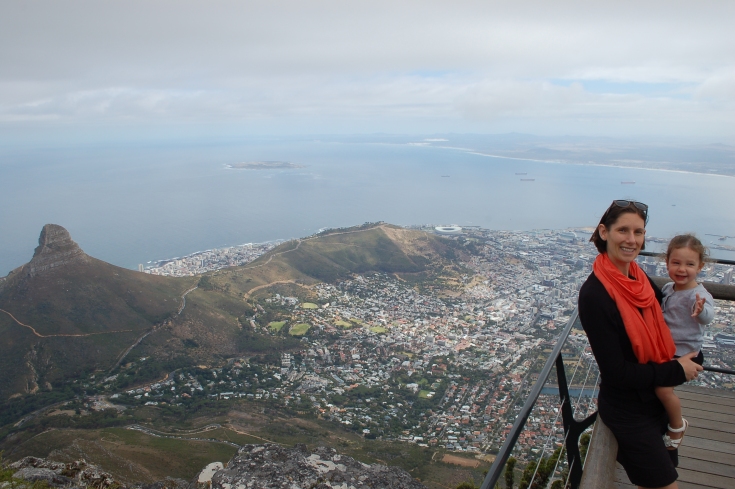 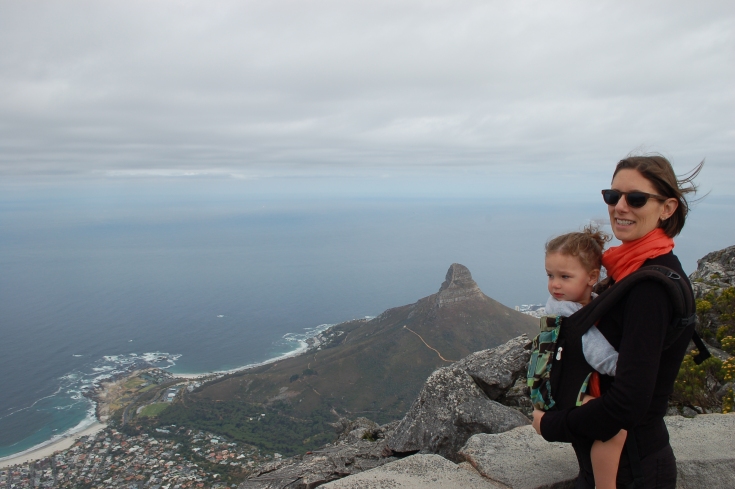 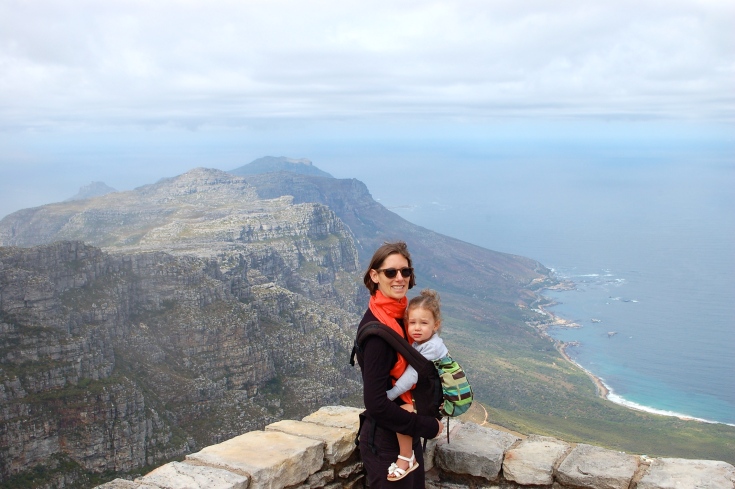 Ella’s always very excited to meet a new cute and furry animal. I can’t blame her, I’m a fan of the hyrax too. 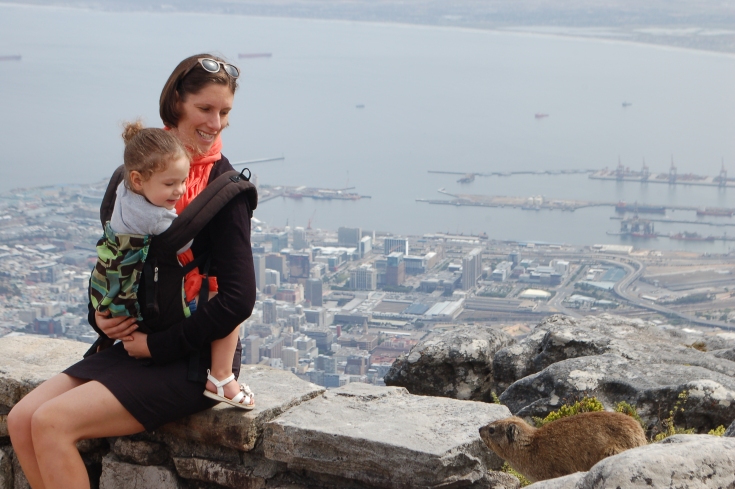 But that excitement starts to lessen as animals get into her personal space. When one approached my shoe, I was warned, “no daddy, no!” 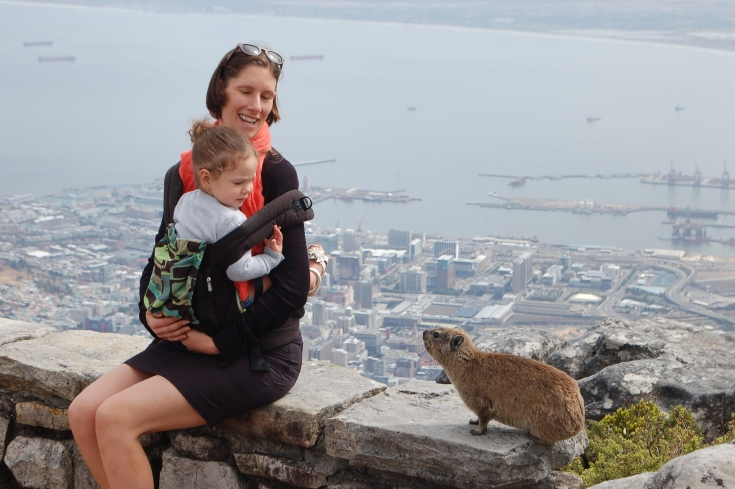 The hyrax on Table Mountain are kind of like the springbok in the game reserve. With the first one, you’re all excited that you managed to see one, let alone that you got so close.

Then you see a couple more and you’re still really excited and snapping pictures. Especially when they’re cute little ones.

Then you turn another corner and suddenly you’re thinking to yourself, “man, I can’t go anywhere without tripping over one of these damn hyrax”. How quickly we get spoiled. 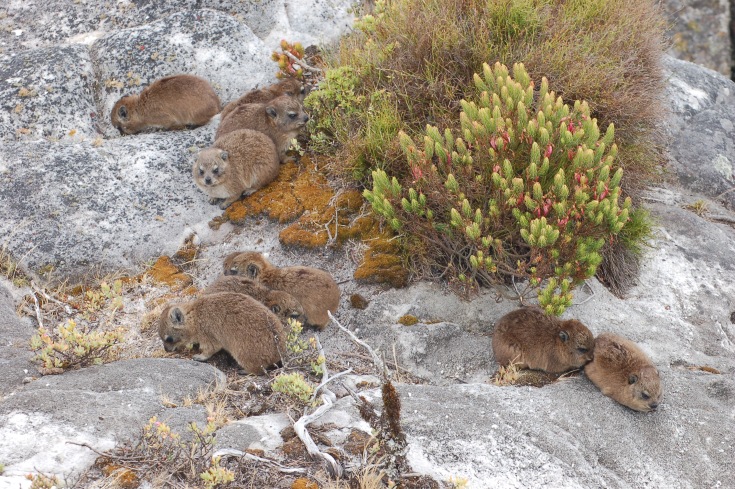 As for getting down from Table Mountain? Well, there are three options. You can walk, take the cable car, or you can abseil. Option three looked like fun, but unfortunately they didn’t have any Ella sized harnesses. 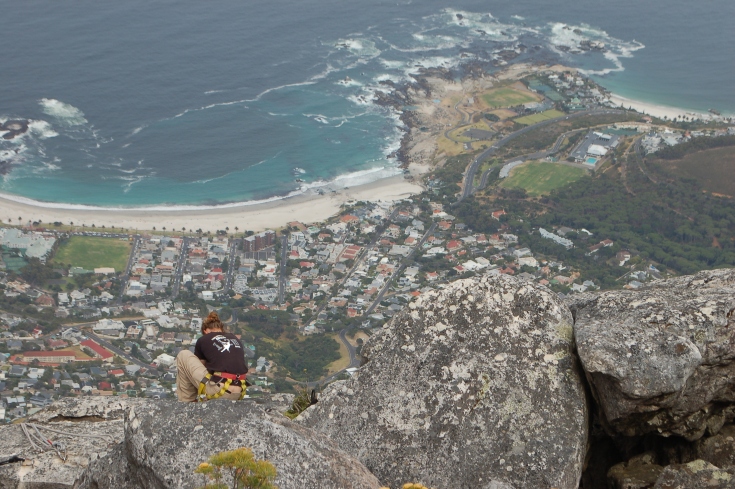 Later that afternoon, we decided it was about time that we made it over to the nearby The Company’s Gardens.

“The Company” in question is the Dutch East India company. Originally a vegetable garden, as the company’s need to grow their own was reduced, it became a pleasure garden with species brought in from other parts of the world, including some squirrels imported from North America.

In part we went because Katy wanted to see the market that they hold there in the evenings during the summer. It turns out that this was not the trendy craft markets that we had seen so far, nor was it full of any kind of local art. No, with a few exceptions, this looked like a dollar store had thrown up on some stalls.

Fortunately, The Company’s Gardens did have other things to offer. In addition to some green space, they had these really neat nest-like play structures near the cafe in the centre of the garden.

Needless to say Ella loved them. Both the stationary ones, and the swings. 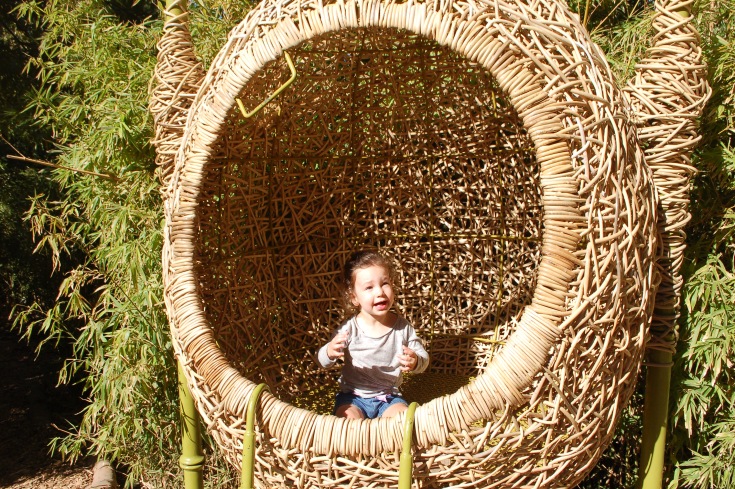 Ella and I could have stayed all evening, but Katy insisted it was time we get to dinner. 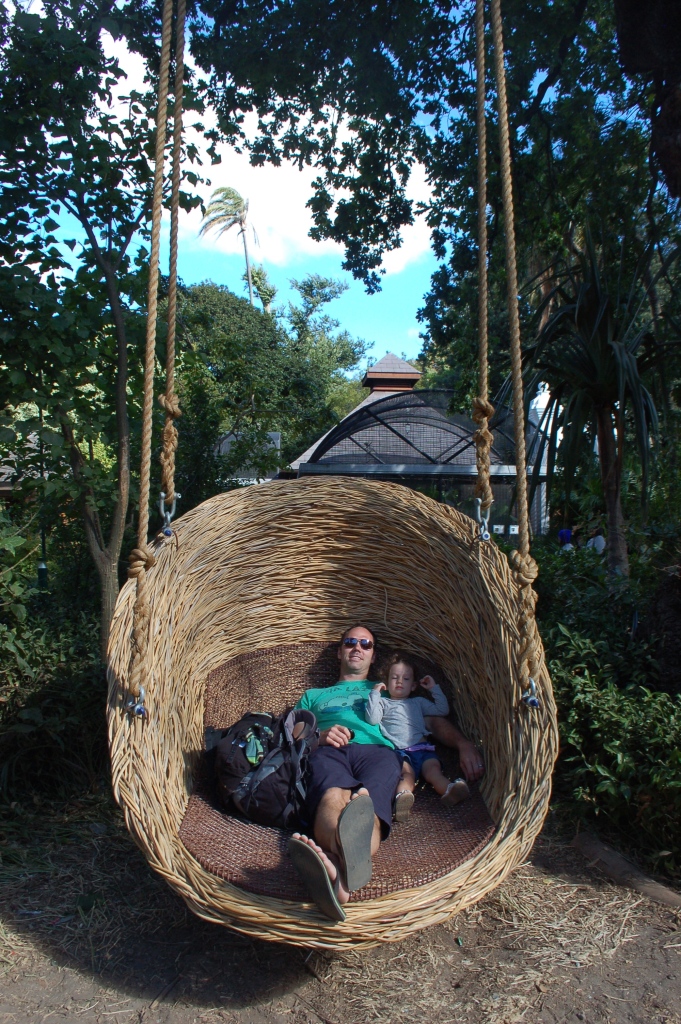 So, on the way home from the park we stopped at Kloof Street House and had some food before heading back to our apartment. 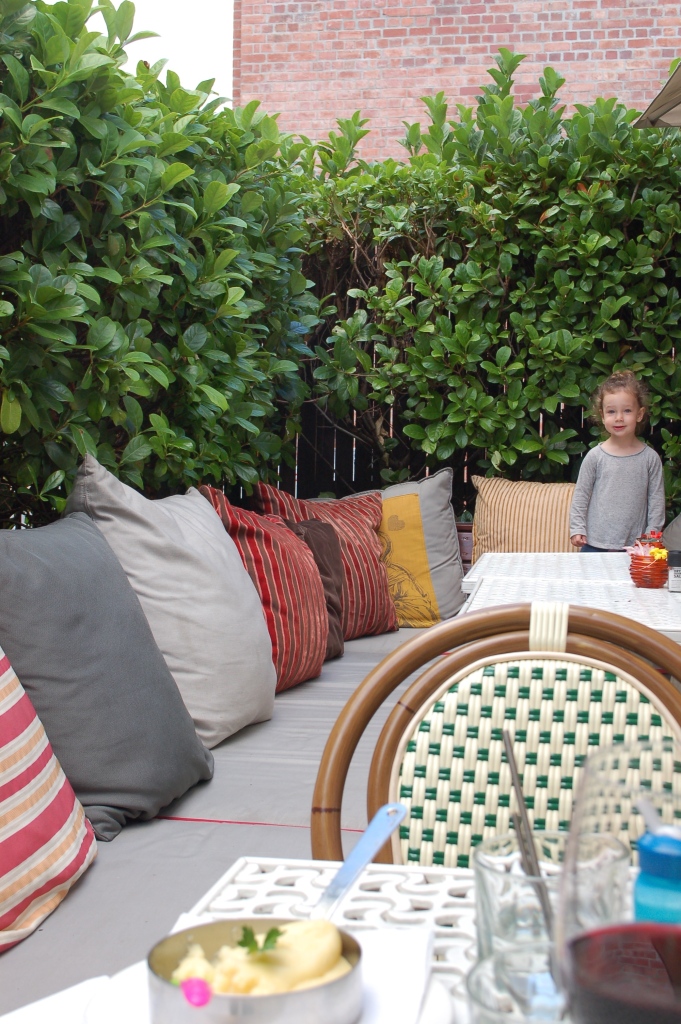 The food was exceptional and they had a great patio. It was also nice that they were tolerant of Ella’s love for running on the bench when the table across from us wasn’t in use.

Tomorrow, Ella and I get to work while Katy goes swimming with some locals